The devil I'm dealing with is only an ersatz devil, a perhaps-once-human person whom time and circumstance has utterly transfomed. But when I wrote the scene I was thinking of images like this one, purportedly of St. Augustine and the Devil, painted by Michael Pacher in 1480: 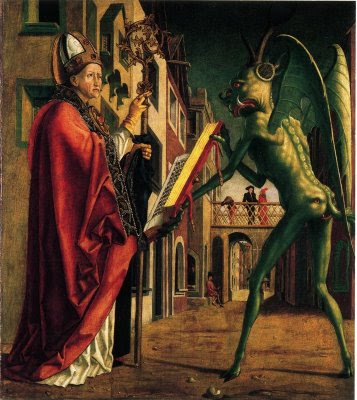 I don't know anything about Pacher, but Hugo Zoom observes this about the painting:

I have seen this painting referred to as Saint Wolfgang and the Devil as well as SaintAugustine and the Devil. I'm inclined to believe it's Wolfgang, as the devil's butt would quit smirking if he was dealing with St. Augustine.

I love images like this one because the devil looks so totally alien. A confection of otherness. Especially because his butt is smirking.

So too the devil in this Daniel Hopfer etching. Hopfer was a late 15th / early 16th century artist. We've got a firebreathing crotch here, and numerous devils flying overhead and creeping behind the trees in the background. But at least for now, it seems the three old women are able to triumph over evil. 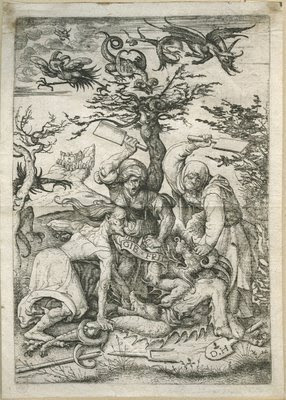 It's a wonderful image because these women, in their decrepitude and flowing longhairedness and wrinkliness and overall crone-like gorgeousness, would have been the sort to most likely appear in medieval and renaissance art as being in cahoots with the devil. Not beating him (or her, if you take the cue of the devil's breasts) into submission.
Posted by Elizabeth Twist at 1:04 PM