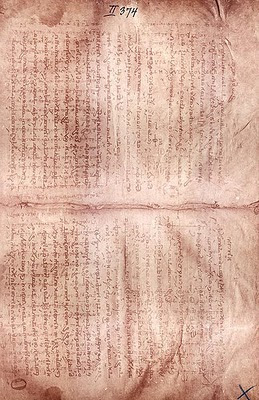 And I would compare myself to a palimpsest; I shared the thrill of the scholar who beneath more recent script discovers, on the same paper, an infinitely more precious ancient text. What was it, this occult text? In order to read it, would I not have to erase, first, the more recent ones?

~André Gide, The Immoralist
Posted by Elizabeth Twist at 3:39 PM No comments:

Do Not Cut Our Shrubs

Last year our elderly neighbours decided that we weren't trimming the flora on our side of the fence as savagely as they would like, and so somebody (I believe one or more of their adult children) got up on a stepladder and cut off as much as they could reach over the fence. They cut off the lilacs before they could bloom. They chopped the new and tender growth from a baby's breath bush before it could release its cascades of delicate white flowers.

I was really angry about it.

Later in the season, when my rose of sharon bushes were ripe with dozens upon dozens of flower buds, they did the same thing - chopped off each and every one before they could bloom.

I won't front. I cried when I saw the damage they had done. I was really looking forward to the bunches of purple flowers that I knew would bloom. And then all that potential was gone.

I am not in favour of neighbour wars, especially against the elderly, but this was too much. So this year, before the new growth of the shrubs could inspire my neighbours or their grown kids to whip out the clipping shears and hack saws, I decided to do an intervention.

"DO NOT CUT OUR SHRUBS: Some of them are dying because of what you did last year."

This was actually the second sign I posted. The first read, "DO NOT CUT OUR SHRUBS: You do not have our permission to reach over our fenceline."

These people have a history of "misunderstanding" anything they do not want to hear. English is a second language for the elderly couple, but it seems to me that they totally get any communication that serves them or is neutral. I did ask very nicely last year that they put away their instruments of torture for the season, sometime between savage clipping number one and savage clipping number two. I pointed out that I would like to do any trimming myself. That request was totally ignored.

I am also fully aware of how passive aggressive and irritating signs like this can be. At the church hall where our tai chi group works out, the pastor communicates with people who rent the hall by using signs like this. "CHILDREN ARE NOT TO PLAY ON THE PIANOS" one of them reads, alongside some standard "LEAVE THE HALL LIKE YOU FOUND IT," and "DO NOT BLOCK THIS DOOR" signs. When a choir that rents the hall took to sitting on a brand new foldout table, a sign went up that said, "DO NOT SIT ON THIS TABLE! YOU ARE BREAKING IT!"

Although no one in our tai chi group had ever sat on the table, we were all upset and irritated by the sign. It's like getting yelled at by someone who can't hear you.

And then there was the handy public humiliation factor. Both of the signs I put up were clearly readable from the sidewalk that runs past my neighbours' house. Although I didn't put their names on the sign, well, anyone who shares a street with this lovely couple knows exactly how hostile they are to plant life.

I could have written a nice note and put it in their mailbox, sure. But I had a feeling that any such note would have gone unnoticed. It's too easy to claim "Oh, we didn't get that."

I wanted there to be clarity.

Sign number one went up two days ago. They took it down. We share a wall between our two attached houses - yelling was clearly audible through the wall.

Today, the couple's daughter showed up on my doorstep. While I am not a fan of confrontation, I am not opposed to standing my ground if necessary. She came into the conversation yelling about my lack of neighbourly attitude. She attacked my apparent lack of employment (hey, I'm employed - just grossly underpaid) and my failure to cut my front lawn "on time" (I never get to it, since they are lawnmower happy and seem to take pride in cutting my lawn for me, an aggression no doubt related to judgement about my apparent lack of employment). She cited the fact that we rent this house as evidence that somehow it's okay for them to violate the property line. She finished off by claiming that I was harrassing her parents.

Score. I told her that I would stop putting up signs when I had a guarantee from her that no one would touch my shrubs.

Amidst a large volley of accusations, she told me that now that "her mother" knows not to cut the shrubs, it won't happen again.

I am holding them to that.

Otherwise, the signs will go back up. I know now that they really don't like them.

Some notes on this incident:

It's been a while since I've had a fight with an almost complete stranger. It's weird how deeply the adrenaline penetrates into your whole system.

It's interesting to interact with people who use anger as a default response to any situation. I think from a strategic perspective that getting them angry was maybe the only way to get them to notice what I was trying to say. Polite requests certainly had no impact at all.

When people perceive that blame might fall on their shoulders, they will lie and scapegoat anyone they can. When it came down to it, the daughter of this couple blamed her mother - who is eighty and all of four feet tall - for cutting the shrubs. Somehow I don't think she got up on a ladder and used a hacksaw to cut through all four inches of living lilac trunk, but you know, whatever.

Lawn/yard/plant nazis are crazy in many different ways. This is the same family that actively tried to kill an old growth maple on their property. Fortunately they didn't succeed.

What has been cut can grow back. 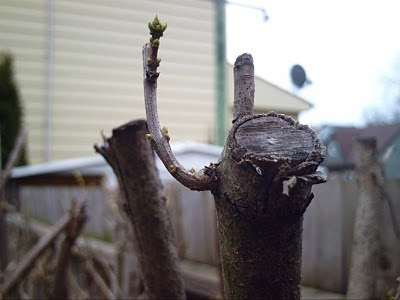 Posted by Elizabeth Twist at 12:44 PM No comments:

When I think I'm king, I just begin

Oh, Kate Bush. You barely make sense and yet you speak to me.

I've been listening to The Dreaming again. It's really wonderful. In the aftermath of February, which frankly sucked, I'm feeling the need for a serious infusion of eccentricity.

I always wonder how Kate Bush managed to break through. She's so amazingly weird, and part of that weirdness is the way her lyrics seem to go straight into my brainpan and massage my creative centre. How could this gorgeous genius be allowed to circulate her strangeness to the general public? Don't the authorities know this kind of thing can result in mass happiness and outbreaks of wild creativity?

Things get even more nuts when you look at her videos. She's a highly disciplined dancer, and everything she's got ends up getting channeled into this wild imagery that's both unexpected and iconic. Dunce caps and minotaurs, everybody!
Posted by Elizabeth Twist at 11:10 AM No comments: