Man of Steel: My Somewhat Superficial Reasons for Liking It

Dave and I saw Man of Steel last night. We both loathed the 2006 Superman Returns thinger. Superman as deadbeat dad: no thanks.

I hadn't read a single thing about MoS except that it was coming out, so I had zero expectations going in. I have to say I liked it a great deal. It was a true reboot / revisiting / retelling of major elements from the late 70s / early 80s Christopher Reeve Superman films, and probably major plot points from comics that I haven't read.

This may be entirely shallow of me, but for my money the best thing about those Christopher Reeve movies was the space goths, particularly Terence Stamp as General Zod:


I mean, shit man. Wow. Not to mention Hot Chick and Big Dude:

At its most basic level Man of Steel is a retelling of the Superman origin story plus the Zod plot. Great fine great. Sign me up!

On the Hot Mess side of things there are a ton of flashbacks, lovingly filmed in gauzy nostalgia-vision. Whether those work for you or bother you probably depends on how you feel about flashbacks. I think they did work to give Clark Kent a bit of depth, although not too much because hey, this is a Hollywood movie.

More confusing were the riffs on Communist art. Apparently, Krypton storytelling involves silvery montages that look basically like this:

There was also some rough bombastic acting at the beginning, but I figured maybe on planet Krypton, you have to be a little yelly if you want to get your point across.

Basically, I liked it more than most movies that are 90% CGI polygons flying around at a ludicrous speed. Henry Cavill is ridiculously easy to like for a guy who is also insanely handsome. I loved Amy Adams as Lois Lane, particularly since Lane gets to do more than be nosy and get rescued. No one is Terence Stamp but Michael Shannon is mesmerizing in his own right (watch Take Shelter and you'll appreciate what he can do). Good times.
Posted by Elizabeth Twist at 6:36 PM 17 comments:

Last night Dave and I watched this BBC documentary from the '90s about the Siberian Ice Maiden, a mummy excavated from a tomb of the Pazyryk, an ancient people of the region who traveled widely and used horses.

There are a lot of interesting things about the Pazyryk, but the draw for anthropologists is that their region has a large degree of permafrost. Some of their tombs filled with water and then froze, preserving the contents to an amazing degree. The Siberian Ice Maiden, a woman buried in the 5th century BCE according to the wiki on her, was unusual in that she was not a warrior - which some Pazyryk women were - nor a warrior's wife - these were buried with their husbands. Evidence of the tomb suggests she had a high status in her culture: there were many animal carvings buried with her, covered in gold leaf. Her coffin was unusually long - originally the team who excavated it thought there were two people in it. The length, however, was there to accommodate her three-foot-high headdress. Her tomb was accompanied by six horses, sacrificed in order that they could be buried with her.

The body itself was very well preserved. While the skin of the skull was gone, the arms and hands remained. Whoever she was in life, the Ice Maiden had received a number of incredibly gorgeous tattoos. Like all Pazyryk art - well represented in rock art and in the wooden carvings in Pazyryk tombs - they include fantastic stylized animals, particularly this red deer:


According to paleoanthropologist John Hawks, the Ice Maiden tattoo is "the earliest known evidence of tattooing anywhere in the world." A quick look at other pieces of Pazyryk art gives a great window into the ways in which plants, animals, and people flow into each other. To my way of seeing, this is evidence of a culture, like many other native cultures worldwide, with a deep understanding of the interconnectedness of all the natural world.

In the BBC documentary, the lead archaeologist on the dig talks about how the Ice Maiden was probably a "storyteller," although the wiki and all the evidence I could see suggested that she was a holy person - a shaman or priestess.

What had my ears twitching as we watched the show were the little details that the people working on the excavation reported. According to Jeanne Smoot, an American who was on the dig, many people had terrible dreams as the excavation continued. It's an uncanny thing, to dig up a dead body, but taking the body of someone so powerful has got to give you the wiggins.

Sadly, I didn't have an Ice Maiden dream last night, but Dave did. I asked him if he got any particular message but he said it was just the same thing he always felt when looking at the untombed dead: put me back. Apparently the Ice Maiden's been saying that kind of thing for a while, through the only means she could: in dreams, and through the failure of an engine of the helicopter that first took her away from her home. (Whether she caused that particular near-accident is up for debate, although in my experience the dead are capable of more than you'd think).

The people I really wonder about, though, are the people who have copied the Ice Maiden's tattoo design - and the design of other prominent mummies from Pazyryk tombs.


I wouldn't mind doing a followup with these women to find out the impact these tattoos have had on them. (In my experience, there's always some consequence to getting inked, usually positive.) To mark your skin with such a powerful image is amazing, to say the least. I imagine you'd catch the odd whisper from the Ice Maiden herself. I wonder if it's changed their dreams.

The complete documentary is here, if you want to watch it.

I'm trying to learn Cantonese. I mention it because if you've ever dived into a new language, you know how tricky it can be. Cantonese is the most radically different language from English I've tried to learn. (I took French throughout grade school and high school; Latin was my language of choice in University.)

As tricky as it is to pick up tones and basic grammar of a language far removed from English, I can only imagine how hard it is to learn English, the ultimate mongrel tongue.

Unrelated: this article on productivity at Brain Pickings is making me rethink my previous thoughts on plodding vs. slumping. Although I write just about every day, I'm thinking it might be time to increase the frequency and duration. Work, Muse! Work!
Posted by Elizabeth Twist at 11:09 PM 4 comments:

I met Jessica Bell via the A to Z of Coffin Hopping Blogfest or one of those. You know. Those things that bloggers and writers and writers who blog do. She writes speculative stuff, suspense stuff, and music. That music bit is important, because it is much of the reason why Jessica was exactly the right person to write "muted," her latest release through Vine Leaves Press. 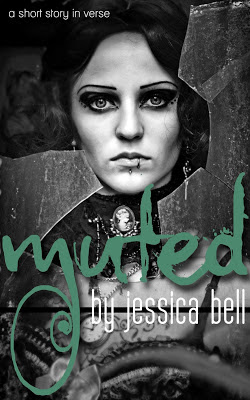 Long story short, "muted" is, as the cover says, a short story in verse. Set in a dystopian future in which self-expression through art and dress and (as concerns the main character) music is strictly controlled, the story traces the crisis of Concetta, a singer who has ended up on the wrong side of the law.

"muted" is richly imagined. Jessica doesn't hold back on gory detail - something I always admire. As a science fiction piece, the story has a lot going for it, opening a world's worth of weird and terrible in its short length. The main thing here is the language, though. This is poetry, written by a musician, about a musician. As a whole, "muted" is about art and sacrifice. If you are looking for something that takes sci fi lyricism to its logical extreme, you could do worse. I liked it.
Posted by Elizabeth Twist at 12:00 PM 8 comments: