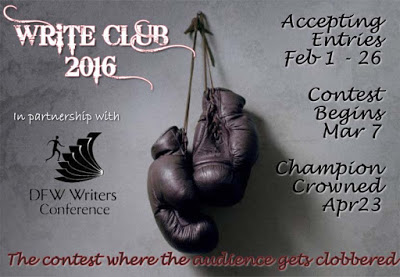 I've often sighed audibly and lamented the fact that there are not enough opportunities for writers to just...fight each other. To battle it out in the pit, UFC style. If the end of the world as we know it would mean that someone would instantly erect the Thunderdome, I would be all for it.

It's a really cool thing, and has been going on for a while, and is only getting cooler. Follow #writeclub2016 for updates!

"The Bird Marriage" at Enchanted Conversation

First of all, that should be "Saint Valentines." There were a lot of them. At least eleven, apparently, one of whom might have been martyred for marrying couples in the Christian tradition.

The association between Valentine's Day and romantic love is something that a lot of people trace back to Chaucer's Parlement of Foules (Parliament of Fowls), in which he wrote that Valentine's Day is when birds choose their mates. Some people have argued that this statement hearkens back to some deep cultural tradition. It's entirely possible he made it up.


Valentine's Day overlaps with the Roman feast of Lupercalia, a celebration involving purification, fertility, ritual sacrifice, nudity, and, as far as I understand it, at least a bit of spanking. (*That might be a misinterpretation but it sounds more fun than lining up to be swatted by fresh goat and dog hides.*)

I adore the idea of modern traditions that overlap with and only barely obscure pagan origins, and I even more powerfully adore the idea that there are beings that somehow still lurk in the shadows, pushing us along at these festive times of year, helping this sorry old world roll forward.

So, I wrote a story about bird marriages, dark incantations, and spells involving candy hearts. It's also about what happens after the happily ever after.

If you'd like, you can read it here: "The Bird Marriage" at Enchanted Conversation, as well as the other fabulous stories from their February Valentine issue.

In the Name of Resurrecting this Blog, I

...signed up for April A to Z. This bodes well: