Small pox, chicken pox: there are lots of different types of pox, but only one earned the name "The Pox" and "The Great Pox" - syphilis. As much as I admire the plague, syphilis has a special place in my heart as the Reigning Queen of All Diseases. She is enduring, she is mysterious, and she was a complete barbarian when she first hit Europe.

The fact is, nobody knows where or how syphilis originated. In 1494, she made herself known, during the seige of Naples by King Charles VIII of France. Having taken ample advantage of the local sexual delicacies, which were ripe with what was called "the New Disease," Charles's mercenary army went back home to their various native countries defeated and infected. Presto chango: syphilis spread across Europe almost overnight.

That year - 1494 - has led some to speculate that syphilis was a New World disease, brought back by Columbus and his friends on their return from their maiden voyage. There is evidence that syphilis was present in pre-Columbian South America, but as the Conquistadors moved through new territories, European syphilis seemed just as brutally infectious to the natives as everything else we gave them. Some studies have shown that certain Old World populations had syphilis-like symptoms prior to 1494. It may simply be that the bacteria responsible for syphilis mutated in exactly the right ways to cause a new epidemic.

Early medicine looked to planetary influences to try to account for the disease. They pointed to a particular conjunction of  planets that occurred in 1484 as the cause of a widespread poisoning of the earth, air, and waters, which showed as the symptoms of syphilis.
In the early days, the symptoms were incredibly severe. Early reports mention men's limbs falling off in a matter of days. So severe were the deep level lesions, an infected person would feel that her bones were breaking. Noses fell off; internal organs rotted; skin was deeply pocked.

Getting syphilis was relatively easy in those days. Curing it was next door to impossible. Armed with herbal and dietary cures, early physicians were ill equipped to purge their patients of this insidious infection.

The quest for a cure for syphilis opened the door to new medical technologies. Enter Paracelsus and his chemical / alchemical school of thought. Focusing on single-element cures for diseases, Paracelsus and his followers decided that mercury was a great thing to give syphilitics. Remember that the whole point of early medicine is to make stuff come out of people. When you're poisoned by mercury, your body tries to sweat and salivate (not to mention vomit, shit and otherwise purge) it out. Physicians argued that the mercury cure was the only way to get rid of such a pernicious infection as syphilis. Of course, there was a strong hint of moral righteousness to arguments in the period that infected people deserved the harsh punishment of the mercury cure. Many physicians acknowledged that if syphilis didn't kill you, the mercury cure probably would.

Eventually, people got used to the reality of syphilis, and the disease seemed to accommodate itself to European life. After the initial wave of infection, syphilis settled down and would now take years to kill, and sometimes years to show itself. It became known as a secret, insidious disease. The most beautiful, apparently untouched youth could in fact be a rotting corpse on the inside. You wouldn't know until you slept with him or her, and then it would be too late.


These attitudes continued throughout the centuries, right up until the modern discovery of antibiotics. Even through the World Wars, syphilis posed a major threat to the Allies' confidence in sending young, inexperienced men overseas, as these wartime posters attest. 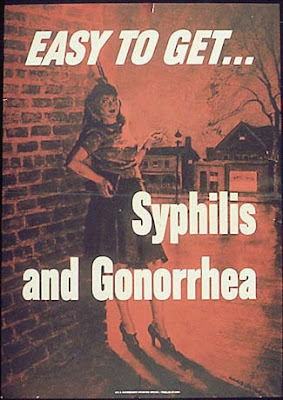 It's easy for us to forget that syphilis was once synonymous with casual sex. 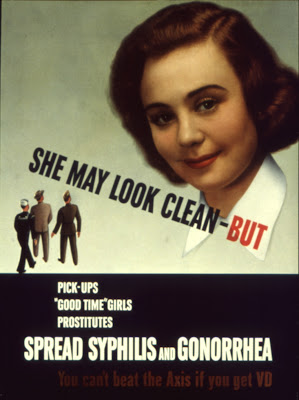 Like many other phenomena, syphilis served to reinforce negative perceptions of women and women's sexuality. 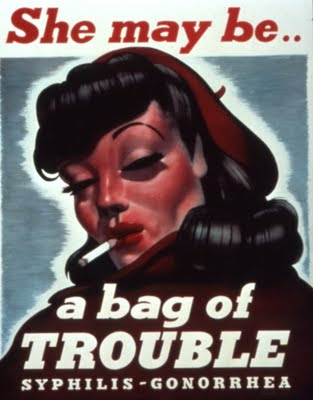 This is my favourite (depicting Hitler, Hirohito, and V.D.):

Posted by Elizabeth Twist at 10:51 PM

You keep blowing my mind with these posts. I had no idea that syphilis was so fast acting when it first hit. Limbs fell off? Noses? Wow.

And, "She may be a bag of trouble" has got to be the funniest line I've read all day.

Oh wow, I had never heard about that aspect of syphilis in the past! I can't believe how much I learned reading all this.

Also, I facepalmed when I read "mercury treatment". But hey, medecine wasn't quite the same back then. XD

O_O I did not know the early history of syphilis. Wow.

@Claudie: this is why I cringe when Paracelsan medicine is credited as being the point of origin of modern biochemistry. Paracelsus was a giant step backward for medicine, not a step forward.

@Laura: It's strange and wonderful.

It's almost like an Ode to Syphilis. Both fun and educational. Keep up the great work!

Funny, well not funny annoying really that in all the ads shown the women are blamed for the spreading of "The Pox!"

@Ann: You should see what they called women in Shakespeare's day. It is not nice at all. Much worse than a bag of trouble.