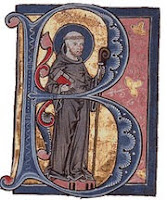 Bubonic plague. The Black Death. The Great Death. Yersinia pestis. The Pestilence. The Scourge of God. What kind of plague enthusiast would I be if I didn't take this "B" moment to write about bubonic plague?

More protracted and sneaky than ebola, not sexy like syphilis, mysterious in its movements, and equally mysterious in its surprise dormancy in Europe after 1721, bubonic plague first swept across Europe in the 1340s. It entered through the city of Caffa when Genoese traders took refuge there, and the armies of Kipchak Khan Janibeg lobbed infected corpses over the city walls. The Genoese traders, fleeing back across Europe, brought the disease with them.

Bubonic plague is a bacterial disease, transferred from black rats to humans (and from human to human) by the rat flea. When infected rat populations die down, the fleas turn to their second choice of hosts for food: us. After a bite by an infected flea follows a painful infection that can take a few days to kill, and involves massive swelling and infection of the lymph nodes, especially in the armpit and groin. These blackened areas of swelling, called "buboes," are what give the bubonic plague its name.

When the plague first sprang up, people didn't understand about bacteria or infection by fleas. To them, plague seemed to strike randomly. An infected flea in a bundle of clothing, received from overseas, could do the trick. A casual embrace in a back alley could transfer a flea. Contact with dirty bed linens that carried the pus from someone who had died of plague might cause infection. Or sharing space with someone who had the less common pneumonic form of the disease, and coughed bacteria into the air you breathed.

Throughout the 14th, 15th, 16th and 17th centuries, while plague reigned supreme in Europe, people came up with all kinds of explanations for its seemingly random activities. It was the result of overheated excitement and crowds, like you got at the theatre. The infection travelled in foul air. It was God's way of taking you out.

In my doctoral dissertation, I argued that it was no coincidence that this time period spawned revenge tragedy, a dramatic subgenre that always ended with a stage covered in corpses. (Think Hamlet.) Art was profoundly influenced by the reign of death. Everywhere you turned, dancing skeletons waited to confront you and ask if you were ready to go with death, if you had cleared yourself of sin, and if you were at ease with the extremely flimsy quality of mortal life. Hans Holbein's Danse Macabre woodcut series in particular played with the close connection between death, sin, and the essential injustice of this mortal coil. There were other danse macabre art works created throughout the late medieval and renaissance periods - some dedicated to women, some painted on church walls, and some composed as songs. (My favourite is called "O no no no not yet.") 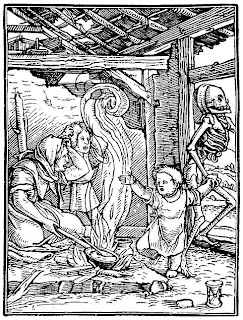 In case you think we're totally safe from the plague, think again. The Worldwide Health Organization reports 1000-3000 cases of bubonic plague worldwide each year. It's all around us, and has even been found in urban tree squirrels in North America. 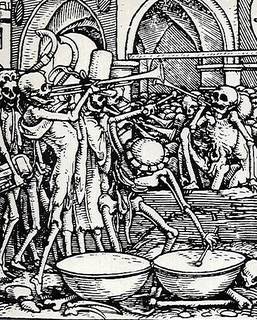 Posted by Elizabeth Twist at 2:49 PM

Fascinating post, this really gives my Muse some ideas. Then again I'm a science nerd, I enjoyed the microbes and disease course I took in my freshmen year of college.

I never the plague was a source of so much inspiration.

The Black Death according to British History books began on the South coast of England in a town called Weymouth. I lived there for 30 yrs and my children were taught this at school.

Your post made interesting reading and am looking forward to letter c.

@Dafeenah: It changed so much of European culture, from economics to art to drama to urbanization. It's fascinating. I loved learning about it.

@Yvonne: That's quite a claim to fame! This was my understanding also. Some accounts from the time period also mention Bristol as a point of entry. I'm sure it was a terrifying time.

I'm finishing my 3rd pathophysiology course next week, and I've never met a plague enthusiast before!

stopping in from the A to Z http://baygirl32.blogspot.com

Very interesting. This is the most I've read about this disease that has killed so many. For some reason, I thought it was no longer around. So much for that.

Just stopped by from the A-Z Challenge!!
gigglelaughcry.blogspot.com

I didn't know it was caused by infected fleas (shivers).

A dark subject indeed. And a unique word choice for the B day.

Great choice, Eliabeth. Have you used the plague in your stories?

creepy to think so many cases are still found in this day and age !
Well done !
JL&B

No, seriously, the plague has always fascinated me in a horribly grim sort of way.

oooohh, even the name, Bubonic, put fear in hearts. But your post is fascinating. Some great knowledge.
Manzanita
Wanna buy a duck

@Deborah: I have this ambitious plan to write a Renaissance plague story, possibly novel length. I've attempted it, but it's something I need to rethink now that I know more about writing.

I will be using this post as a Story-a-Day-in-May prompt, so I should be writing something about plague shortly!