Today's post was going to be about effigies, eulogies, or elegies - any of which would probably have made an interesting story prompt. But I took the dog for a walk in the woods today, and I changed my mind while I was out there.

I've posted about these woods before: they are a little corner of amazing wilderness tucked away at one end of our small city. A lot of teenagers party in them at night, and they leave behind the usual evidence: the leftovers of campfires, broken beer bottles, crushed beer cans, bags of picnic garbage. (Nice, kids: Smoky the Bear says Only You Can Prevent Forest Fires. Also, Clean Up Your Shit.) 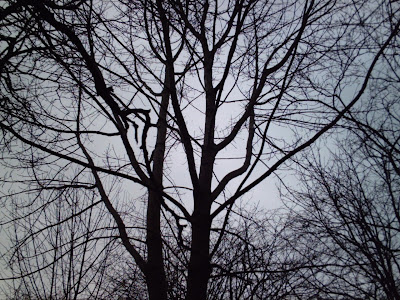 Occasionally, people leave things behind in the woods that trigger my imagination: how did this happen? Why would you leave that behind? One of my all time favourites was a pair of men's jeans, with a giant hole ripped down the seam of the crotch. The weirdest part was that they were oh-so-neatly laid out across a tree branch, as if the owner planned to return and fetch them. They were there for the rest of the summer, and for all I know, might still be in there somewhere, probably lining a squirrel's nest.

Today, I came across the weirdest collection of stuff to date, clustered together in a grove of hawthorne trees. It seemed a bit sinister to me, and I decided to let my imagination work on it and turn it into a story. How could these things have come to be there? Feel free to speculate in comments or in your own fiction about how all these items could have come to the woods. I'll have to leave you with just a list: I didn't have my camera with me, although I wish I did, and I might take it with me next time in the hopes that the stuff is still there. Here's the list: 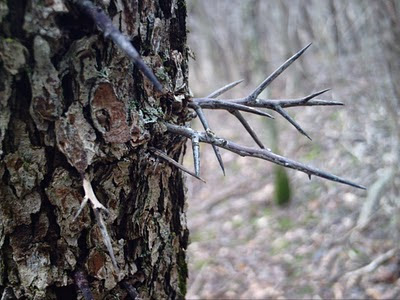 Posted by Elizabeth Twist at 3:49 PM

Love today's post and the pictures. I feel like I take a deep sigh and relax as I read your posts. Will be coming back for A-Z.

The last item on the list is extremely intriguing. Definitely raises a lot of questions in my mind.

I love days like that where odd little things call for big questions.

New follower by way of the A to Z.

Smokey the Bear rocks! Your woods look lovely, but sinister is right about your findings. *shiver*

Visiting through the A to Z Challenge. :) Hi!

Marie at the Cheetah

Well, from examining the evidence of the scene in the woods, I am going to say a female asthmatic was robbed. A great use of found objects to spark ideas. Good luck with the challenge!

Great post! I have to get you a copy of "Bedstead men", by the great British musical comedy duo of Flanders and Swann, which takes this phenomenon - bedsteads and left boots being abandoned in the English Countryside particularly, and builds up a story of a secret organization, determinedly smuggling these to every field and fen, on the belief that they actually improve the beauty of the landscape!

E is also for Elizabeth!

Urban "wilderness" areas tend to attract strange things and events. The evidence left behind could be part of a joke, trash left behind, or the clues to some mysterious happening. They would make good fodder for stories for sure.


Contrary to my usual practice of subscribing to comments, to save time during this early part of the challenge I will not be doing so at this time. If you want to respond to my comment, please email me directly from your email notification for the comment.
Thanks. And I truly appreciate your efforts.

Wow, this could definitely have the makings of a story beginning!

@Marie: Yay Smokey! I love walking in those woods. It's full of wonderful energies and animals. I've seen deer, foxes, and a pileated woodpecker. Not to mention the not-so-rare wild teenager.

@Laura: Ha ha ha! I love it. But how do you account for the bucket?

@Chris (kelworthfiles): That sounds awesome. Thank you, by the way, for the lovely post in my honour. (Curtsies deeply.)

@Arlee: It's the specific story that I think will prove challenging and interesting to construct.

@Trisha: My gears are turning over this unexpected pile of stuff. Thanks re: the photos - I have the world's cheapest digital camera, so I take literally hundreds of pictures to get a handful of nice ones, but it does occasionally produce the unexpected.

I love the fact that you're walking around with your writer eyes open, Elizabeth. I should do that.

Great post! Those are some pretty odd things you found, especially the tampons tied like that. lol

I'm really enjoying your blog. I almost did a post on doppelganger too.

Wow...I wish I lived near those woods :) This makes me want to go exploring and see what I can find. Thanks for the inspiration :)

Your pictures remind me of fall. The only thing is, I want spring. Could we have pictures of green grass and bunnies please :))?

Okay, thanks to the greatness of YouTube, I can share Bedstead Men with all of you, as well as a funny slideshow that somebody made to go with the song. Enjoy!

Love the moody pics. All that stuff you found, wow, the purse and hair clip is mysterious.