In the English Renaissance, the concept of judgement was a big deal. Everyone knew that eventually, no matter who you were or what your station in life, you would eventually have to answer to one judge, or rather Judge: the Big Kahuna himself. Images of the Last Judgement flooded Renaissance society.

Adding to English cultural anxieties about the Last Judgement was Calvinist thought. Calvinism and its thinkalikes placed a heavy emphasis on predestination, the idea that God had already determined the course of every event that would ever happen. Traditionally, predestination creates some issues for Christian thought, given the notion that we have free will. If everything is predetermined, then how do our decisions, which are ours alone to make, actually free?

Calvinist thought placed less emphasis on the importance of free will, and more on God's omniscience and omnipotence. In this system, whether you were damned or saved - or, in the parlance of the times, reprobate or elect - was determined long before you incarnated here on earth. So your actions - what you experience as your choices - are merely symptoms of whether you're going to end up taking the down car or the up car at the end of your life. It was a neat resolution of the problem of God's omnipotence vs. human free will, but it did create some interesting side effects in the Renaissance, like the ubiquitous obsession with remembering that you will die, and the need for constant vigilance lest you fall off the straight and narrow track and end up proving that you are reprobate.

One could argue that the ever-popular dramatic structure of the conflict that ends in a revelatory court trial (think Merchant of Venice) is part and parcel of this overarching interest in and anxiety over judgement. In many ways, we might owe the undying Law and Order(s) to the Renaissance and Calvinist thought.

Nowhere did this interest in judgement prove more lurid than in books for popular consumption, however. Collections of tales like the enormous Theatre of God's Judgments (originally published in 1597), gathered oceans of evidence for the eager reader that proved, again and again, that those who transgress against God are found out. Fortunately for us, this 500-page tome is freely available via Google Books. If you're interested in the pulp fiction of the past, it's worth it to sort through the idiosyncratic spelling and typesetting of the Renaissance to read some stories from this book.

The Theatre of God's Judgments might, in another context, have been called The Book of Instant Karma. In the section on disobedient children, a son who makes a face at his mother causes her to wish that he would hang on the gallows. Surprise! He's caught stealing and is hung soon after, "and being upon the ladder, was perceived to writhe his mouth in grief, after the same fashion which he had done before to his mother in derision."  Those who enjoy their drink provide much of the slapstick in the book:

one Thomas Alred...an accustomed Drunkard, being entreated by a neighbour to unpitch a load of hay, and being at that very time in drink, letting his pitch-fork slip out of his hand, and stooping to take it up again, flipped from the cart with his head down-wards, his fork standing upright with the tines, he fell directly upon them, which at once ran into his breast, and struck his heart so, that he died suddenly.

The lesson of the Theatre is simple: there is no escaping the consequences of your actions. In its super high volume of tales, it provides something much more than simple moralizing, however. The book is almost gleeful in its reporting, and many of the tales are hilarious in their slap-bang-boom execution. This is down and dirty, and quite mean-spirited entertainment. 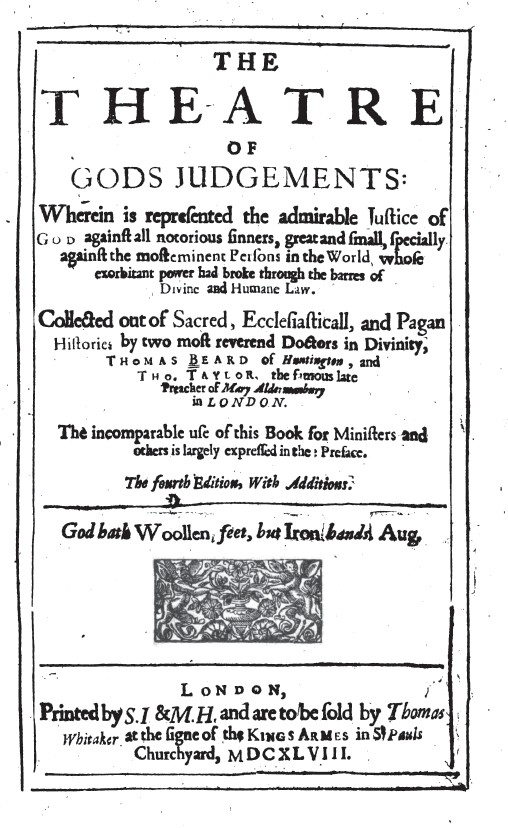 Posted by Elizabeth Twist at 10:58 PM

very intreasting post! wondering what the next letter will bring?

@Mood: The more things change, the more they stay the same, although I think much of the conversation around judgement has shifted to the secular realm. Reality television, anybody?

@baygirl32: Something nefarious, no doubt!