Making a List, Checking it About a Hundred Times a Day: NaNoWriMo Days 6 and 7

I made it through an action-packed weekend with my word count more or less intact. Despite attending an emergency summit of girlfriends, teaching a double tai chi class on Saturday, and running a four-hour intensive workshop on Sunday, I kept on writing.

By the end of Sunday (Day 6), my word count was at 18953. Day 7, and I'm at 22648. My people are due for a mini-event that will presage the (disastrous) turning point of the end of Act 1. It should make the next couple of days relatively easy to write.

A while back a very wise writer from my home town told me that it's a great idea to keep a running list of characters as you write a novel-length project. Of course it is. I have a terrible habit of forgetting even major characters' names over the course of a ten-page short story. They often get renamed several times - a problem I deal with in revision.

With this project, I have a huge cast I'm working with, and many of the people appear only for a  moment to be disposed of in nasty ways, but you never know - they could show up later. This is a story that deals with life after death and harnessing spirits, after all. I realized I might be causing myself problems later on by not tracking character names, so today before I wrote I sat down and combed through the 36 pages of my manuscript, noting anyone who is mentioned in the course of the story, whether that character is central or not, onstage or not. The list is pretty and of limited legibility. I'm naming people on the fly and will probably do more checking later to see if I've introduced any anachronisms with these names. Major characters are in red; everyone else gets plain old black ink. 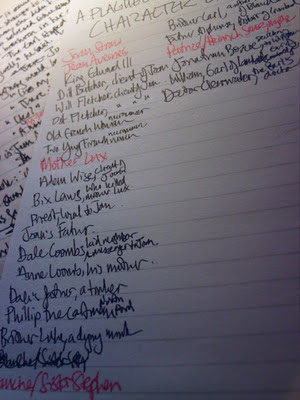 Posted by Elizabeth Twist at 12:12 AM

You are on fire. This is nanowrimo at its best.

You are truly kicking ass and taking names. ;)

Posted a little tease of your bookish goodies. Heading into international mail, soon...

I've been doing this too - I have a separate document with a list of characters ...and also on the list are other things I need to remember. Like the names of certain rooms they work in, and the name of a class they have to take, etc.

Software programs like One Note that is bundled with Office 2010 is also great for jotting things down while you write.

Thank you, Debs and Red Tash. Sounds good, Trisha: I am afraid of forgetting / randomly changing significant details. Thanks for directing me to One Note, Michael. I guess because I compose on paper, and often turn the computer off while drafting, I tend to keep notes on paper too. This is why my white board and cork board are so important!