Very happy I've kept the ball rolling on the forward progress today. This NaNoWriMo thing is great! Plot progressing on the fly; themes coalescing magically; bad writing happening with the good; research scanty but there, and effective. Very grateful for Wikipedia despite my academic superego telling me it isn't a good research source. Telling academic superego to suck it. Also very tired and sleepy. Aiming to divebomb the bed by midnight.

Oh, and earlier today on nanowrimo.org I posted a synopsis of the novel, and a cute mock book cover that I made.

In the ancient middle east, a massive army gathers in the foothills beneath a mountain city, the last to resist a tyrant king. The soldiers feed on one thing alone: the blood of their general.

In medieval France, an English woman watches as an actor in a stage play beheads one of his fellow players without remorse while the audience applauds.

In the latter years of the 16th century, two young would-be playwrights meet at a gathering in the house of a great lord to watch a private performance. The star of the show, an actor playing the role of Death, moves with a preternatural grace, and commands an exceptional respect among the elite audience.

As the English monarchy crumbles under the pressures of a sinister Parliament, an Italian woman painter, famous for her gory art, arrives in London to serve under Charles I. Along with her brushes and canvases, she carries a secret weapon against the undead.

The Medlar Tree is a novel about the secret history of the Great Undeath, about the relationship between political power and supernatural power. Caught between an elite that has been tainted with the infectious blood of the undead, and the common people who die to feed them, a group of playwrights, actors, and artists must choose sides. 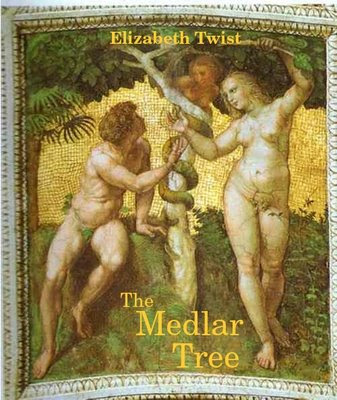 Image: Raphael's Adam and Eve, 1509, from the Stanza della Segnatura.
Posted by Elizabeth Twist at 11:23 PM