Everybody's into the Tudor royal family these days. There have been more films about Elizabeth I than I personally care to watch. But there's something fascinating about these people. So I'm including them in my novel. Today I was working on a bit about Mary Tudor, Elizabeth's older half-sister, and a totally sadistic nutjob, as far as I can tell. 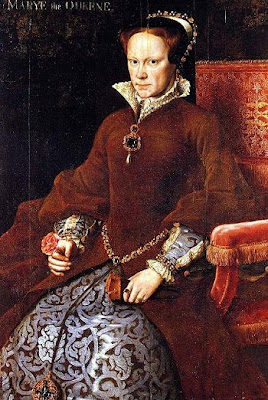 A plausible explanation for the behaviour of the Tudors is that they were involved in a vampiric blood drinking cult. Because really, what goes better with power than superinfected blood that imparts a slightly longer life and supernatural abilities - if it doesn't kill you?

A hilarious interactive site with some crude yet hilarious photoshopping work on the portraits of Henry's six wives can be found here. Seriously, go take a look at that. It will make your day.
Posted by Elizabeth Twist at 1:15 AM