So one procrastination point on Saturday was taking the evening to go see Opera Hamilton's awesome production of The Magic Flute. A previous production of this opera had left me impressed by the Queen of the Night's famous aria ("Hell's vengeance boileth in my heart"), but basically thinking that Magic Flute was a weird and cute crowd-pleaser. Not so with tonight's production. It was a deeply weird and ritualistic production, rich with quasi-Masonic (or possibly seriously Masonic) imagery, techniques from German expressionist theatre, and some incredible casting of children as the three spirits who help out the protagonists with handy interventions as they undergo their trials.

It was also hilarious. As with many productions of this opera, they translated the recitative into English and spoke rather than sang it. But this wasn't dumbed down dialogue - it was often smart and smartass, too. Way to take a risk, Opera Hamilton!

During the show, I had a flashback to a vinyl record that was in my parents' collection. I think it was just an "opera lite" selection of Mozart pieces, but it had a picture of Papageno on the front.

Papageno is one messed up character. 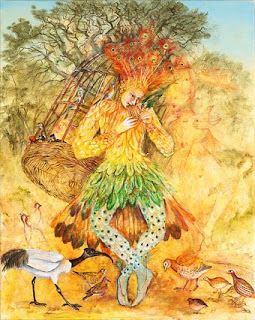 He's a man; he's part bird; and his job is collecting birds for the Queen of the Night. What they do with the birds, I don't know. But there's something of the weird cannibal in Papageno.

As a kid, I just could not figure out the picture on the album cover, which was much freakier than any of the images I could find of Papageno online. But watching the production at Opera Hamilton tonight, I had moments where that frisson of disorientation came back to me.
Image by Kay Konrad.

Thanks for the memories, guys.
Posted by Elizabeth Twist at 1:17 AM