Word Count: 14740
Poisonings by zombie blood: 1
Horses with a taste for human flesh: 1
Births: 1
Wives of Henry VIII: three down; three to go

I hadn't intended to make Mary I a character in this book. She really is a dour sort if you judge by her portraits. 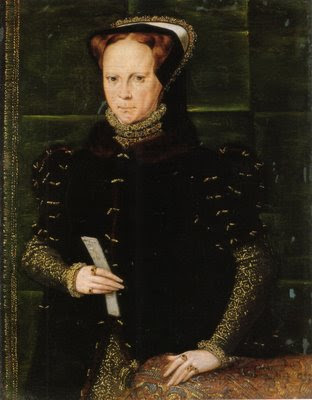 (Portrait by Hans Eworth, done between 1555 and 1558, and therefore during her brief rule and not so long before her death.)

I thought that Mary and her fellow monarchs would remain figures in the background, using the power of vampires to keep the common people down, but who wouldn't make many personal appearances. But to give the book texture, and to give more context for why the low characters are encountering vamps and zombies by the bucketfull, I decided to add her and some others (so far, Henry VIII, Jane Seymour, little Elizabeth I - soon, Edward VI, Philip II, James I, Charles I) into the mix.

And it must have been tough for her - being interested in killing people and flip-flopping England back to Catholicism after the measures taken by her little brother Edmund couldn't have been easy. There are apologists who claim that had she been able to live longer than she did, she might have been able to establish peace long enough to return England back to stability, and she might have secured it as a Catholic nation.

I keep lingering on this detail of her long final illness, however, that she apparently thought she was pregnant on more than one occasion, the first of which was in 1554. Eventually it turned out that she was suffering from a large cyst. She went to her death believing that she was pregnant, declaring her husband Philip II of Spain regent or guardian of her child after her death.

That's gruesome enough for me to spin into a malicious bodily plot. In my treatment of Mary, her crimes against humanity are largely driven by a lifelong habit of sipping the blood of vampires.