Hey! I hope you, uh, maybe liked that month-long story that I posted here back in April!

Since then I've been writing up a storm, enjoying ("enjoying") the weirdest, driest summer Southern Ontario's had for a while, and getting ready, among other things, to release a collection of previously published and new stories. (That's coming up shortly. I commissioned a cover for it that is TO DIE FOR. I think you'll like it. Furthermore...and this is just between you and me...it's going to be free. These stories have just been kind of sort of sitting there, unread, for a while, and I want you to have them, if you want 'em, that is.)

In the meantime, I've had two ultra-short pieces published. The most recent is a reprint of "The Bell," just out from Digital Fiction Publishing. It features that old timey coffin technology whereby the buried person could signal the surface if there had been, you know, a mistake. But it's really about melancholy and helplessness.


A little while back, my 200-ish word story, "Status: Quarantined" was included in the AE Micro 2016 issue. This little gem of a magazine, published by the absolutely gorgeous AE: The Canadian Science Fiction Review, contains five ultra-short stories on the topic of Change. You can read my story here, or, you can print out a pdf of the issue and fold it into an adorable tiny origami book. 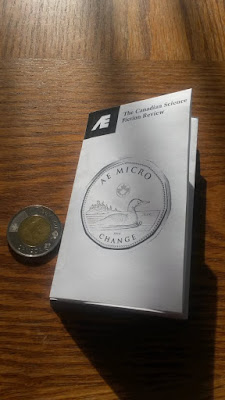 For my piece, I wanted to explore the transformative nature of parasites, and the behavioural changes some of them create in their hosts. I wrote about that from a host's perspective. The story's a little bit about biological imperative and altruism.

(You know about parasites that change host behaviour, yeah? If you don't, this is the cutest video I could find on the topic. Click at your own risk though. Watching that could cause YouTube to suggest utterly gross stuff to you for longer than you might like.)

Posted by Elizabeth Twist at 3:01 PM