In the crazy history of crazy ideas about how to get your stuff done, this is not the craziest: writing your novel one page a day.

I have always been a NaNoWriMo style sprinter when it comes to first drafts: my style is to stock up on caffeine, plan to get much less sleep than usual, pick up my pen, shut my eyes, and run screaming down the paper track until it's done.

This has worked beautifully for me in terms of getting out a first draft. It has also left me wondering if there isn't some way to do a first draft that doesn't leave you physically devastated at the end. It has also made me wonder what happens if you write a first draft much, much more slowly, taking enforced pauses at various times.

Writing at breakneck speed is a great way to create a sort of frenzied intimacy with your plot. You can see the whole thing really well because you don't have very long to go until you hit the end. I typically have very intense dreams involving imagery, if not themes and characters and plot points from my novel. Again this is great but I wonder if there's a more subtle way for a book to be present in your mind.

(Sidebar for the woo woo crowd: Last July during Camp NaNoWriMo, this intensity was so powerful it transferred over to Dave: one morning on our regular commute he told me about this bizarre dream he'd had. It was the scene from my novel that I'd written the night before, while he was sleeping. I hadn't told him about the scene ahead of time.)

So I'm trying this other thing. Something similar to this. Here's the infographic version of that very important and swear-word filled piece of gloriousness, courtesy also of Chuck Wendig: 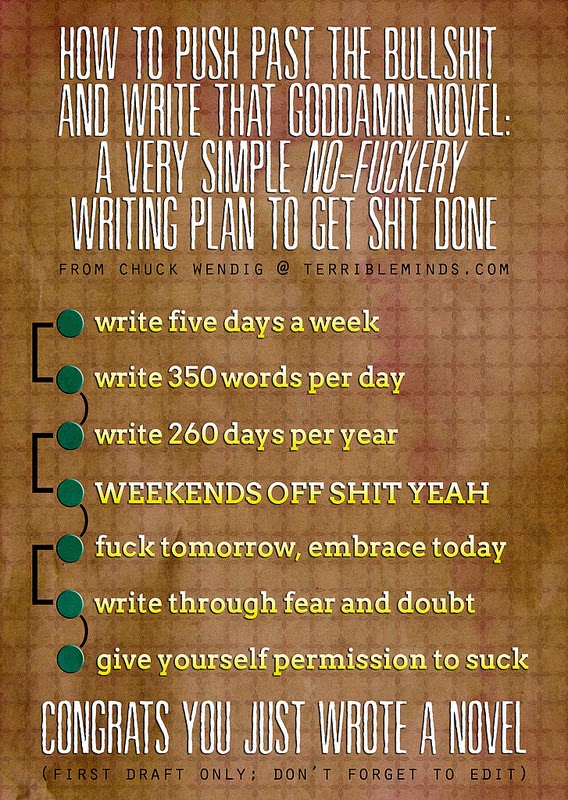 So I'm doing a modified version of this, although I love the plan, and it looks ideal for someone who is just having a really crappy time fitting any writing at all into a week. I'm writing a page a day: a nice, tidy unit of variable word count. I draft by hand, so this works for me. One of my hand-written pages is 500-600 words, most of the time.

I'm not giving myself weekends off. Saturday is my busiest workday in terms of my teaching, and almost always will be, so a weekend isn't a weekend in my week. I'm planning a shorter book - novella? novellette? No idea of the designation - 100 pages in first draft. I started writing February 2, and I'm planning to finish on the last day of April, so I'll be doubling up on pages twelve days between now and the end.

Here's the really experimental fun part: I plan to stop at the end of a page, regardless of whether I'm mid-scene, mid-paragraph, mid-sentence, mid-murder, mid-kiss, mid-shenanigans, or what.

What do I expect to get out of this? Darned if I know, but when Sarah Van Den Bosch did a similar challenge (precisely 500 words per day, or "The Graham Greene Challenge"), this is what she had to report:

Forcing yourself to stop before you feel you’re finished keeps you thinking about the story and when you’re thinking about your story, you can’t help but to keep pushing it forward even if it is only in your mind. Not only that, but I found myself scrutinizing more over word choice. What would be the best fit for that sentence? Is that really what I want to say?

So far (three days in), I'm finding the writing a wee bit hitchy. Putting in an artificial stop, especially at the beginning of a story when there's so much stuff to work in, feels a little like a lurch, a little harsh. During my non-writing 23 and a half hours a day, I do feel my story churning away in the background, a sort of low-key hum, even when I'm not actively thinking about it. I'm looking forward to having energy to keep working on other projects at the same time as the novel develops. I'm curious about how much brainspace the story will take up, and I'm wondering about the potentially magical full-sleep / novel-writing combo.

I'll let you know how it goes.

Posted by Elizabeth Twist at 11:11 PM

Well when he puts it like that, it looks easy. I could write a novel before breakfast (in a year).

In fact I might. An extra novel. This reminds me of Dean Wesley Smith. Writing is easy- wheeeeee! Honestly, I don't know how I manage to spend so much time on it

I guess the point is that I don't spend so much time on it. I've just spent 30 minutes (before breakfast) reading e-mails, checking in a on my writer's forum and thinking about this post. Eeek! Am I really frittering (good word) so much time?

Wow! Do you have to be a potty-mouth to write a novel? (don't get me wrong - I kinda like the idea)

I tend to keep writing until I hit a snag and then I'm not inclined to go back to it because I have a snag waiting for me.
Your solution addresses that problem well!

I don't dig this word-count formula at all. I think it's a short-sighted idea typical of a society that goes too far in worshipping labels that over-simplify everything and relieve us of the duty to think. I have a 10k short story which is in no way a novelette. It has precisely the scope and structure of a short story regardless of word count. I will always respect the author's choice to designate their work as they see fit.

Certainly sounds interesting. I would think it would require a more disciplined, long-term approach than just getting it out as fast as possible. Looking forward to hearing it how it goes.

@Andrew: Thanks for the schematic. Some of the bigger magazines tend to publish novelettes almost as much as short stories, which is a good thing for those of us who have trouble keeping things on the non-verbose side.

I thought it would drive me crazy to stop in the middle of a sentence, but I

@Debs: I am liking the lowball word count goal. Today was a two-page day, and it felt like a crazy marathon compared to writing one page.

Also, I don't know: I sometimes think that writing-associated tasks are just as important as actual writing tasks. Not that you should spend more time on your forum or reading blogs or whatnot, but it is good to get the odd bit of writer-socializing in. Dave tells me that at his company, many people spend about a quarter of their work day taking breaks and talking with colleagues - not all of it work-related talk. Yet, they still get stuff done.

@FWG: Hey you!!! To answer your first question: fuck yeah!

Word count designations, like most labels, are terms of convenience, I'd say, so others know what you're talking about. Story is story, though. Are you thinking of subbing that longish short story for publication somewhere?

@mood: So far (uh, day four?) it feels like a different kind of discipline than the hard and fast approach requires. It also feels like no big deal to sit down and write a page, almost luxurious. I'm already done my page (plus one) today, and I've got...all this other time? I'm going to spend the next chunk of it editing. And talking to you guys.

LOL
That made me laugh. I mean, people put that LOL thing just as acknowledgement and stuff, but I LOL'd.

Hey, best of luck with the new program. Keep on keeping on... a little at a time! ;)