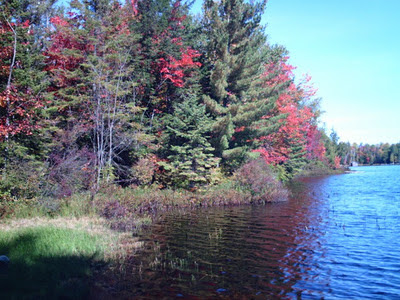 So, I've been away. Specifically, I've been in a Muskoka chair on the grassy shore of this jewel of a Northern Ontario lake. While I was there, and during the bits of September and early October that weren't spent there, I was sick with Deathflu (tm).

Look out for this flu, people. Everyone I know who caught it ended up with wicked bronchitis that stretched on for weeks. I'm (mostly) better now, but it took a while.

But ours is not to whine. My point is that normally while I'm up on Lake Charming, I spend most of my days scampering through the woods, meditating, and doing tai chi. The wild energies in this pristine natural setting are nothing short of mind blowing. No coincidence that throughout history, those who like to meditate tend to retreat to mountainous caves where no one will bother them and there is a low chance of human contact. The Lake Charming property is home to deer, moose, otters, beavers, herons, loons, ducks, jays, chipmunks, red squirrel, bear, and wolves. (Wolves!) It's an amazing place for a retreat.

This year, though, I was debilitated with Deathflu (tm). I had no choice but to sit in a Muskoka chair and read. (I know. It's terrible, isn't it?)

And read I did. I read up a storm.

I read at home, but it's all too easy here to get caught up in television watching and the daily grind. Some days it seems like it's all I can do to grab twenty minutes with a book, never mind the long solitary hours necessary to finish a novel or a story collection in one bite. But it's all about how you choose to spend the time you have, you know? And yet again I remembered how wonderful it is to sink into books and not come up for air. Since I've been back, I've been cultivating my reading habit on three fronts:

What are you reading?
Posted by Elizabeth Twist at 4:44 PM

You novel premise sounds exciting! I'm trying to read up on Don Quixote for my NaNo novel.

My story revolves around an amateur sleuth sister duo who uncover a connection to a 40-yr-old cold case murder while tracking down the Fishtown strangler before one of them becomes the fourth victim. I'm still working on the story summary, but that's the basic premise at the moment.

I'm supposed to be reading, 'For Whom the Bell Tolls' for my book club. Instead I'm reading a collection of Philip K Dick stories and the back issues of Redstone (which opens Nov 1)

Good luck with NaNo--hope you're well and ready to hit the keyboard.

Sorry to hear about the Deathflu, I'll do my best to avoid the crud down here in Wastelands, >cough< ahem, Texas. Ontario looks beautiful and it reminds me that there are places of solitude and fall colors.
I haven't decided on NaNo because the story I would work on I really want to submit before the end of that month: It's a sci-fi, here's my tag/concept: When Fitch Garland is abducted, he discovers his DNA holds the key for a dying
alien race. Lyric Germanus, an Iridian daughter--the alien species worshipped
for the creation of humanity--discloses her people's plan to destroy mankind in
order to save themselves. A new age has dawned, and human and alien must learn
to trust one another to save one species from extinction and another from total
domination in a "Universal Reckoning".
Whether I actually get it done or not will be another question entirely. Glad you are back, you've been missed!

Laura, that sounds great! I'm intrigued to know how Don Quixote figures into the picture! Looks like the new Rails-driven NaNo site hasn't launched yet, but my NaNo user name is Elizabeth Twist. I would love to be your NaNo writing buddy! That goes for anyone else reading this, too.

Debs, you're a book club rebel! I didn't last long in the book club I joined a while back. No one wanted to read genre books. I will have to check out Redstone. They've been closed for a while, haven't they?

LB, thanks. It's an amazing place. Hope your NaNo plans are falling into place.

Autumn, your plot sounds great! I hope you're able to get 'er done and are well into revisions by the time November hits, but at the same time, I'd love to see you on the NaNo boards come November. Thanks for the welcome back!

The rest of the uglies series is just as good, and Westerfeld's take on vampires is also worth reading (Peeps, Last Days)(and ties in to your deathflu theme)

Best of luck with NaNo!

Seriously, i would TOTALLY read your NaNo book. It sounds completely badass.
I hope you're feeling better!