When I was studying early drama, my favourite character was always the Vice. In medieval allegorical drama, Vices are spin-offs of the Seven Deadly Sins. They have names like Mischief, Covetousness, Nought, Nowadays, and New Guise. They are nasty, troublesome characters who want nothing more than to cause the downfall of the protagonist by leading him into temptation.

The thing about Vices is that they have boundless energy, and are virtually immortal. Even if they are beaten, they always bounce back in the end. They are the original supervillains. Onstage, they are often in cahoots with the audience, getting their participation in the corruption of the main character. Essentially, they are clown figures, always goofing off and telling dirty jokes, even as they work on behalf of the forces of chaos and evil.

They are so very wrong, so very bad, and so very fun to watch.

Physically, Vices are often exaggerated in their forms, as these images from the National Library of the Netherlands Medieval Illuminated Manuscripts show:

If you're at all inclined to think allegorically, these are amazing images, I think. Note that almost all these figures are women, with the (possible?) exception of Hypocrisy. As I'm sure you know, the Virtues (Faith, Hope, Charity, Prudence, Justice, Temperance, and Courage) were traditionally personified as women. After all, Faith, Hope, Charity, and to some degree, Prudence are female names. (I did know someone who named her son Justice, but that's beside the point.)  Later on, the Vices / Seven Deadly Sins were commonly depicted as men, but originally, in the very early days of the Church, they were also women. The Virtues and Vices, two opposing forces, fought for sovereignty over the human soul (also traditionally depicted as female, regardless of the gender of the soul's owner).

I have wondered if it wasn't the rise of drama that killed the depiction of the Vices as women. As the stage developed into a commercial enterprise, it became illegal in many parts of Europe for women to act in dramas. (They were still allowed comic roles on some parts of the continent, but not in Britain, at least not until the late 17th century.)

Just as Vices almost never died onstage or in allegorical works of fiction, they never quite leave us. They are still there in films (see the early part of Jim Carrey's career, Jack Black, and other over the top comedians). For those of you who spend a lot of time online, the Vice surfaces again and again in the form of the internet troll. 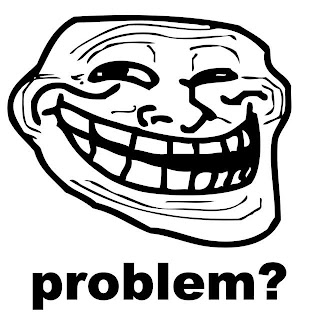 While your mileage may vary in terms of encounters with actual internet trolls, the iconic version of this figure can be pretty darned amusing.


If you run into serious trouble, though, there is an antidote. (The makers don't allow embedding - click through if you've got a couple of minutes and you want to be amused.)
Posted by Elizabeth Twist at 9:53 PM

Ha, well, it would be odd to call Treachery down for dinner. Or her sister Pride. Good stuff. I always love the pictures you dig up.

I totally had no idea! That is really cool.
Edge of Your Seat Romance

This was all fascinating stuff, cheers.

Interesting! I've never seen Vices depicted. I think it's funny how long "tooting one's own horn" has been around.

Good luck with the last couple days of the A to Z Challenge!

Thanks for stopping by, Shannon. A to Z has been a lot of fun.