You're out shopping. A woman comes up to you, and says, "Hi Brunhilde." You have to explain that you're not Brunhilde. "Oh my gosh!" she exclaims. "You look just like her." (By the way this anecdote only works if your name is, in fact, not Brunhilde.)

You've had a near brush with your doppelgänger: a double of you who is out there in the world, but who isn't you.

Lydia Kang, over at The Word is My Oyster, posted a brief consideration of the possible medical underpinnings of believing you've been doppelgängered and the "syndrome of subjective doubles" last week. It's fascinating reading.

Literally, the term means "double walker." In the ancient and medieval world, seeing a double of yourself was bad news. People reported seeing a ghostly double of a living relative, performing actions that the person him- or herself would perform shortly afterward. To this day, some people report seeing copies of themselves in their peripheral vision, in positions where no reflection is possible. On a recent episode of the Mysterious Universe podcast, a caller reported waking up in the middle of the night to find his girlfriend being choked by a shadowy figure. After he managed to dispel the figure, he asked her what she had seen and experienced. She said she'd been attacked by what appeared to be a monster - with her boyfriend's face. 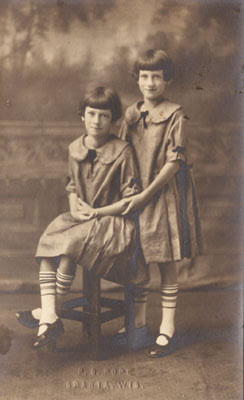 Doppelgänger accounts are richly suggestive of all kinds of paranormal / alternative notions: the non-linear nature of time; the ability of thought forms to manifest in concrete reality; and the mimicry capabilities of spirits or dark entities, just to name a few.

The gothic writers in the late 18th century went nuts for the doppelgänger motif. The term was coined by one of them - Jean Paul, in his novel Siebenkäs, published in 1796. In gothic terms, the doppelgänger was often associated with a failure of a character's self-coherence, and a sign of impending insanity or loss of identity.
Posted by Elizabeth Twist at 7:12 PM

I've been told I have a doppelganger in the area. We've never met, but in high school, I had several instances where someone would ask me why I changed clothes when I hadn't. One time I was sitting diagonally from a guy, and he was asking another person why I was in that strange truck. Then, he noticed me, pointed to the truck, back at me, and said, "But...how did...you were...what." It was weird.

That was a creepy post. I'll have to sleepp with the light son.
-mood

I find these type things fascinating. Sometimes it's hard to tell if I am "me" or the doppelganger.

I love the myth "if you see your doppelganger, you'll die within the week." That's why you never see your own doppelganger. :)

Doppelgangers are so creepy. Interesting though, I love the whole idea of parallel universes, that another "you" may be out there somewhere...

I've never been mistaken for anyone (certainly not a Valkyrie like you were). But the thought that there might be one out there doesn't creep me out that much, although I suppose the whole "if you see yourself, then it means you're going to die" is a little unsettling. I suppose it's a good thing you never actually met the woman!

Creepy, yes. But I've been told I look like other people so many times, I console myself with the fact that I have a common face :). Would have loved to do this word for my D post!

Interesting! I grew up with the understanding each and everyone one of us has a double in this world.

Interesting. . .facinating. . .and very creepy! I think I'll be sleeping with the light on too. (:

neat post! It caught my attention since the word has come to light in The Vampire Diaries series. When I was in highschool quite a few people told me there was a girl going to a neighboring school who looked exactly like me. I never met her though.

I get mistaken for other people on occasion, but the disbelief that I'm not who they they they are surprises me. Usually when you get up close to someone the differences are more pronounced. One guy in college would always give me strange looks, even AFTER he knew I wasn't the person he thought I was. But the concept makes great creepy fodder for stories.

I once saw a picture of a random girl from Florida who looked exactly like me. I actually fooled a few friends and cousins with it.

I've changed my hair style and color since then, so I'm not sure if the resemblance is still as eerie.

@Cherie: so close! You almost got to meet your double. According to Devin, that might not have been such a good thing....but I am picturing some awesome The Parent Trap style shenanigans.

@Dafeenah: There's the seed of a super cool freaky story in your comment.

@Devin: or why you never hear about anyone seeing their own doppelganger

@JEFritz: It was just an example. I'm not sure I'm cool enough to have a Valkyrie as a doppelganger.

@Ann: Cool! I would love to know who told you that belief, or how you came to have it.

@Katie: I wonder if you would have thought she looked like you.

@Bluestocking: I think that other people staring at you because of potential doubles of you is creepy enough.

@Kristina: You found her! Now get in touch with her and plan world domination.