(By the way don't Google this topic. People are so, so gross.)

We all know what this is, right? A paraphilia, or sexual fetish that involves corpses. Like many sexual fetishes, necrophilia has the potential to reinforce common cultural inequities. The overwhelming majority of images and commentary online to do with necrophilia are rape fantasies, or jokes that imply rape. ("She can't say no if she's dead.")

(I could comment extensively here also on the Vampire Romance genre as a form of necrophilia, but properly speaking, necrophiles prefer the dead, not the undead or living dead.)

At the same time, stories about necrophilia can turn the tables on rape culture, or explore more sensitive territories (no play on words intended...well, maybe a little). Remember "Kissed"? The woman protagonist's necrophilia was based not only on her obsession with death and dead things, but on her ability to perceive exquisite beauty in the process of dying.

"Kissed" has a convoluted set of origins. The film is based on a short story by Canadian writer Barbara Gowdy. It appeared in her collection We So Seldom Look on Love

. The title of the collection - and, presumably, the inspiration for the story - came from a mock ode poem by Frank O'Hara, "Ode on Necrophilia" (source). 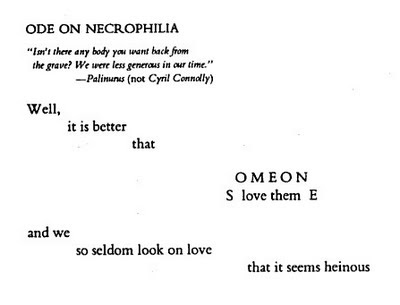 Posted by Elizabeth Twist at 12:53 PM

Labels: blogging from A to Z challenge, Story a Day in May

Yeah, this is indeed strange stuff and to quote you, people can be really gross.

Necrophilia can also expose harsh realities like the way rapists and at times our entire culture view women as less than human. The film Deadgirl does this really well. It's an uncomfortable film to watch, but I think it's worth it. Although this may venture more into vampire territory because she is an animated zombie, but can't communicate.

@Titania: I've heard of Deadgirl, and had planned to skip it because (based on a review) I thought it was reinforcing the idea that it's okay to rape / women are less than human, rather than criticizing that view.

Thanks for the heads up. I will put it back on my list of things to see.

Well my first thought was "Last Dance with Mary Jane."

(and there's my saturday afternoon academic talk ... perhaps I can make myself stop now ... maybe not, I have a LRRH paper to write, and there's a bunch more centralism there)

I never know what you are going to write about. But it too is a part of life, although disgusting to us folks. Amazing the information I get from your blog....

The things humans are capable of never ceases to amaze me. I just can't even begin to imagine what is inside of the mind of a person that does this.

Yikes...amazing what some will do. Strange, strange world we live in.

what an intresting selection for N! I won;t be googling it though

I mean, if I was dead too it'd be okay LOL

Pretty messed up subject alright. A couple posts ago I wrote how I thought Snow White laying suposedly dead waiting for some dude to kiss her was leaning towards necrophilia.

Ewwww. This is one dark corner of the horror genre I haven't touched in my writing -- yet.

I know people who hold that opinion, but I disagree. I guess you can read it as you want. I saw especially the ending as a bleak view of our culture's future and not as a reaffirmation of rape culture. Here's my review of the film if you are interested: http://titania86-fishmuffins.blogspot.com/2011/02/women-in-horror-deadgirl.html

@Jeanne: I try to consider all POVs.

@Dafeenah: I am going to try, for Story a Day in May. I am trying to give myself story prompts that will play out in an interesting way.

@TS: I agree. I will check out that post.

@titania: I will check that out. Thanks for the link.