I've been planning to write a story about Lulu Hurst for some time, ever since I first heard about this amazing woman from Ben and Aaron of Mysterious Universe. According to her autobiography, Lulu Hurst (The Georgia Wonder) Writes Her Autobiography and for the First Time Explains and Demonstrates The Great Secret of Her Marvelous Power (yes, that's the full title), Hurst was gifted at the age of 14 with an amazing ability that she refers to simply as the "Power" or (curiously enough) the "Force." A real life nineteenth-century superheroine, Hurst was able to send the "Force" through a cane or a wooden chair, and make full grown men fly around the room uncontrollably. In her stage act, she would have as many strong men as could hold the cane grab onto it with all their strength. Placing only an open palm on the cane, she would laugh (something she argues was a key to using the Force) and the men would be tossed in every direction for several long minutes.

Hurst never showed signs of exertion. Men who participated in these demonstrations often reported feeling ill and exhausted for a day or more after the event. 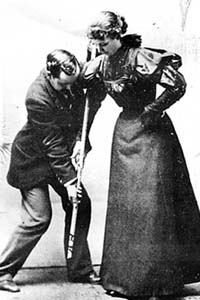 We are very much used, these days, to stage illusionists and special effects, and we tend to dismiss accounts like Lulu's as mere hucksterism. I'm reading my way through Lulu Hurst's account of her life and her relationship with the "Force," and I see something else at work here. She claims that she was able to move people and objects without any physical effort on her part. Indeed, at first, she really seemed to think of the "Force" as something separate from herself. Only gradually was she able to keep it under control. She was an accomplished table rapper - someone who is able to answer a stranger's deepest personal questions via knocks on a table that are delivered by an unseen hand. Once or twice, she performed hands on healings: on a politician's wife, who suffered from neuralgia, and on a freight train engine that was struggling to pull a heavy load uphill - both apparently successful.

Hurst maintained that what she could do was a product of completely natural principles, not supernatural ones. (Although there is something distinctly poltergeisty about the way her powers came about, which I won't relate here because it's a long and convoluted story. But I completely recommend that if you're at all interested, you read the book - it's available online at the link above for free, courtesy of the Digital Library of Georgia.) She held that anyone can do what she did. I haven't hit the part of the book where she explains it all, but I can't wait.

You might be thinking that Hurst had an enormous crew of tricksters and people willing to play along with her act. Such performances could be fabricated easily, and the rest of her claims could be completely fictional.

On the other hand, as an internal martial artist, I've personally experienced many of the things Hurst claimed she could do. I'm no Lulu Hurst, and neither are my friends, but I have been thrown eight feet across a room by a two-inch punch, delivered by my tai chi master. I can easily resist the muscular force of someone much bigger than me, because I know how to use the natural structure of my body to channel that force. As a reiki and shamballa practitioner, I've performed self healing and healing on others with my hands - healings that make the recipient feel heat, tingling, and sometimes lightheaded or tipsy - all symptoms Hurst reports in her "victims."

Although such demonstrations can look completely fake if you aren't used to watching them, being on the receiving end of an experienced internal martial artist's technique is like being caught in a blender. The no-effort quality of the practitioner's defenses make it look like the "attacker" is simply a bad stunt man, but in my world, this stuff is quite real. I wonder if Lulu Hurst, a 14-year-old Southern belle of the late nineteenth century, didn't simply have a wonderful natural affinity for using chi.

Stranger things have happened.
Posted by Elizabeth Twist at 12:18 AM

Oh, I hope you write this story. It sounds fascinating. I love reading about stuff like that.

Fascinating story. Usually the people who have these "abilities" are quite unique themselves. I do think it takes a certain personality to be able to showcase these "talents"..Somewhat like the charisma and sensitivity of a Shaman in tribal societies.

This is absolutely fascinating. Especially how it relates to your experience with martial arts. Thanks for sharing this story. Lulu Hurst sounds like quite a remarkable woman!

Very interesting. I'm going to click on your links. I love reading Yogananda, and my husband and I follow a Himalayan monk. Some yogis can do remarkable things. You know who's for real just by being in their presence.

I can't wait to read that story, Elizabeth.

@Leslie: Hurst claims throughout her autobiography that she is just an ordinary southern girl, but clearly she has some amazing insights, and having the "Power" definitely took her on an extraordinary life path.

@Melissa: If you're at all interested in women's history, Hurst's story is amazing.

@thursdayschild: I would love to know more about your practice with the Himalayan monk. My practice includes tai chi, qigong, and Taoist chanting.

@Deborah: Thanks! The first draft will be part of my Story a Day in May efforts.

I am reading this story. Just replied to you on my own blog. My husband and I follow a Himalayan monk who does levitate when in the Himalayas.

@thursdayschild: Is that the type of levitation where they use sound? I've heard stories about that technique.