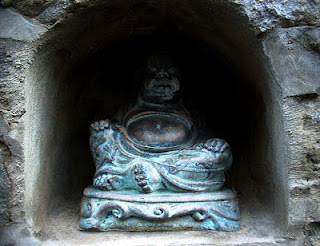 I've been sitting on this news for a couple of days now, and boy, am I ever happy that I can pass it on.

Dark Faith 2 is the follow-up volume to editors Maurice Broaddus and Jerry Gordon's Dark Faith (Apex Publications 2010). I highly recommend the first anthology to anyone who is interested in questions of faith, belief, higher powers, credulity, and humanity's place in the great mystery of the universe. Horror and dark fantasy writers can explore this material like no one else can. We spend our time thinking about all the ways things can go horribly wrong, after all.

My story, "Kill the Buddha," was written at a time when I was having a crisis of faith myself. I am a practicing Taoist. I've studied tai chi, qigong, and Taoist ceremony since the mid-nineties. During fall and early winter 2011, there was a huge, some might say seismic, series of changes to that aspect of my world that I did not want and that were ugly in the way they went down.

I soothed myself by listening to Eckhart Tolle's two books on audio: The Power of Now and A New Earth. If you've never encountered Tolle, his essential message is the same as any of the great spiritual teachers: ego is a false construct that rides on, and is composed of, thought. The ego fights against enlightenment, or being in the now, because it perceives such a peaceful state of being as diminishing to itself. (It is.) At the time I started "Kill the Buddha," this conflict loomed large in my personal life, and seemed to me to be a perfect core conflict for a story about faith.

At the same time, I started to think about what might happen if mass numbers of people all began to achieve enlightenment at the same time. What if people simply started transcending? What would that look like? To those who were still stuck in regular, ego-based consciousness, it would seem to be an enormous threat, one that required study, strategy, and counter-attack.

"Kill the Buddha" features enormous Buddhas, a kickass heroine struggling with her own crisis of faith, and more action than one would probably expect in a story based on Buddhism. When Dark Faith 2 comes out, I hope you'll pick up a copy.

Posted by Elizabeth Twist at 12:17 AM

I just saw this announced a few minute's ago on the Dark Faith subs breakdown, and I came running over here.

This is fabulous, Elizabeth. I've been commiserating with my writer friends as they dropped out of the final rounds of cuts.

Your story sounds great. It's interesting it terms of what I was talking about on my blog, isn't it, putting real life experience into stories. Yet, it sounds like you've used that as a springboard for your story.

I'm so pleased for you. You rock. And thhis is a great anthology to get noticed.

That is awesome, and congratulations. Definitely sounds like something I may be interested in checking out when the time comes.

Congratulations! I always love hearing the story behind the story, and yours sounds inventive and personal, hard to pull off both at the same time. Keep us posted when it's published!

I did, once, see a story about a race that had reached enlightenment. All except one guy. They left him behind alone to guard the world, because he couldn't transcend. I can't remember what that was in, now...

Wow, this sounds great! I will check it out!

BTW, there's a much earlier book called Killing the Buddha, a Heretic's Bible that I have. It's edited by Peter Manseau & Jeff Sharlett.

Congratulations! That's a great anthology to be included in. I look forward to reading your story.

Thanks, Deborah! I'm excited about it. And yes, since I've been thinking about it, there is plenty of multi-directional wish fulfillment in this story. Were I inclined to be self-conscious about it, I would be kind of embarrassed, really.

Thank you, Hildred! It is good to see you here again.

I will keep you posted. I'm not sure about the timeline.

That sounds great, Andrew. If you do remember what it is, let me know.

Thanks, Catherine. "Kill the Buddha" comes from a famous quote by Lin Chi, a Ninth-Century Buddhist master: "If you meet the Buddha on the road, kill him." It means basically that it's important not to fetishize / idolize anything, because doing so creates attachment, which in turn causes suffering.

It's an evocative phrase. Many writers have used it. In my story, it means something quite different than the traditional interpretation.

Thanks, Folly! I feel like I've said it a million times, but I am super excited.

*laughs* totally worth it.

This sounds interesting to read it, thanks for passing it on.

congratulations. I would like to know more about the crisis of faith that you went through. Those kinds of reflections tend to be a very deep and thoughtful read and perhaps I can use your experiences to reflect upon my own.

Excellent. Where can I get a copy?

I'm composing an email to you, Michael. Some parts of this crisis need to be on the non-public-ish side for the time being.

It is forthcoming. I will post again when it comes out, fo shizzle. It'll be available through the big retailers and the Apex Books website. Dunno if they're doing an e-book this time around, if that's your thing.

Wow! Congrats! Those are the news that make me the most happy. To know other great authors are doing fine make me happy because I know the sun can shine for all of us. The anthology sounds quite interesting! I'll get my copy of the first volume and will be sitting on nails until the second vol, with your story, is available.

Both sound so interesting. I'm always fascinated by other's beliefs and ideology.

Hi Elizabeth
Stop by my blog and pick up your Lovely Blog Award!

What an interesting anthology.

CONGRATS!!!! Thanks for sharing your good news and what inspired you.

Thanks Gina, Emily, and Laura! Catherine, I will come by immediately! Thank you!