So Abraham Lincoln, Vampire Hunter is looking good? Maybe? Anyway, I realized that the very existence of this much eye-rolled, possibly good film might make the content of this blog post irrelevant / eyeroll worthy, but whatever. If you don't know what I'm on about, here:

Now that you've seen that, check this out. Inspired by a Rue Morgue Magazine note on the topic, I've been researching Abe Lincoln's funeral train. Wow. Via Abraham Lincoln's Assassination:

Abraham Lincoln's funeral train left Washington on April 21, 1865.  It would essentially retrace the 1,654 mile route Mr. Lincoln had traveled as president-elect in 1861 (with the deletion of Pittsburgh and Cincinnati and the addition of Chicago). An example of a published schedule is pictured to the right. The Lincoln Special, whose engine had Mr. Lincoln's photograph over the cowcatcher, carried approximately 300 mourners. Willie Lincoln's coffin was also on board. Willie, who had died in the White House in 1862 at age 11, had been disinterred and was to be buried with his father in Springfield. A Guard of Honor accompanied Mr. Lincoln’s remains on the Lincoln Special. Mr. Robert Lincoln rode on the train to Baltimore but then returned to Washington. The following information summarizes the martyred president's final journey home.


(Emphasis mine.) Good God. You have to love those nineteenth-century types with their lack of squeamishness / hands-on obsession with death.  This would make an incredible foundation for a ghost story, wouldn't it? If not about Lincoln specifically, a story that takes place on a mega-extended funeral train route would be interesting. Question: anyone know how good nineteenth-century embalming techniques were? Would the corpse last the journey? 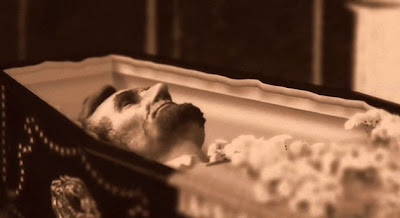 On a totally other note, a Korean woman's mouth was inseminated by a parboiled squid that she was eating. After she reported into the emergency room with pain, doctors removed twelve "'small, white spindle-shaped, bug-like organisms stuck in the mucous membrane of the tongue, cheek, and gingiva'—the dead squid’s live spermatophores," according to Death and Taxes Magazine. A spermatophore, because I know you need to know, is basically a bunch of semen, aggregated together, with an "ejaculatory apparatus" and a "cement body for attachment." Precisely how it attaches itself to stuff (including the inside of your mouth) is, according to biologist Danna Staaf, a mystery.

All we need to invent absolutely disgusting alien species is a more thorough knowledge of what is here on this gross, diverse planet of ours.
Posted by Elizabeth Twist at 4:59 PM

Have you seen the Leviathan 63? It's a replica of the steam locomotive used to pull Lincoln's funeral train. I've seen it and even ridden on it at our local railway museum. I've heard they're planning to retrace the funeral route (as much as possible) in 2015. http://leviathan63.com/leviathan63.html

Also, while I was searching on this topic, I found out that Lionel has a Lincoln funeral train set: http://lionelllc.wordpress.com/2011/10/18/new-product-spotlight-the-lincoln-funeral-train/

Note to self: No parboiled squid EVER!

I always learn something over here. :)

Was able to catch that movie over the weekend and was pleasantly surprised with it.

That second story will give me nightmares. Glad I don't eat seafood.

Wow. My dad is a steam enthusiast. I'm sure he knows about the Leviathan 63. How cool. Thanks for stopping by!

Oh my god, I smile everytime I see your posts in my inbox!! Congrats on Dark Faith BTW!
Love this post, now I'm ramped to write a story about trains and ghosts...too good to pass up!
I'm with Miranda, gah! I'm passing on the squid!!

I hope you don't mind that I shared a story today over at the Kelworth Files, involving you and a discussion we had over on Stringing Words about chimeras. :)

I am sure it is delicious or there is some other awesome reason for eating it. At the same time, I agree with you.

It was my absolute pleasure to provide your grossout for the day.

Yay! The more you know, right?

Re: seafood, me too. Good to know that the film is not too bad. No doubt I'll see it at some point.

Autumn!!! Good to see you, my dear. I hope you are able to come up with a ghost train story. Thanks for the congrats. I am suitably chuffed.

I love the chimera theory. So handy for when you've got plot bunnies to recycle.

I read that story too...it made me ill.

Here's hoping that film is right up your steampunk alley, Jay. The trailer seems to be promising some good fight sequences, too.

Oh my, I can't believe that squid story. Is that true. Yikes.

And attitudes to death are really interesting across different times and cultures. There's got to be a story there. There's a new call out for a train anthology. let me find it: Eibonvale press, I seem to recall. Ah, here it is. I can't see the pay though. I think it's a copy. Anyhoo it looks cool.

Eep...I will never look at the squid in the same way.

I just had to follow up with - I'm still thinking about this bizarre, revolting occurrence. Well done, you. LOL ;-)

Great googly-moogly, that squid story is horrifying. Stories like that would turn me into a vegetarian if I didn't hate vegetables so much.

we love our loved ones so by the time they will be gone we make sure that they have a proper burial, and everything is in proper order..we ask some help to Beinhauer Family Funeral Services they provide everything that you've wanted, they will never let you down..

@low cost funeral pittsburgh, do you have any thoughts on squid-to-mouth insemination? By the way, I think Lincoln's funeral is over, so you missed the boat on that one. I do admire how you squeaked past the spam filters, though.