In Print / for Purchase

The original Dark Faith anthology had an amazing array of short stories in it, all exploring issues of faith like only speculative fiction writers can. When the call for the second anthology came out, I was in the middle of a crisis of faith all my own. "Kill the Buddha," my contribution to Dark Faith: Invocations, is a dark mirror of that crisis. It also features giant buddhas, and a woman in a pickup truck who is on the hunt. I'm very proud of that story, and super proud to be part of this anthology. 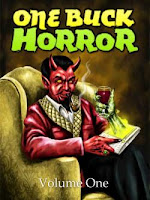 "The Last Nephew" appeared in the inaugural issue of One Buck Horror. It is a steampunkish horror piece about a boy's ultimate bid to fight on his own behalf against the monster who wants him.

Sadly, One Buck Horror is in limbo right now. I'm hoping at some point it will come back. 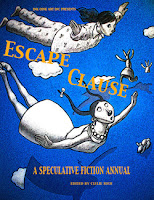 "From the handsome imaginations of award-winning storytellers and rising stars in the field of speculative literature, we bring you Escape Clause: twenty-six short pieces of fantasy, sf, horror, and ghostliness. We’ve got a deathbot, five dragons and a muscleman. We’ve got saints on the prowl, nuns on the lam, and a goddess on a stick. We’ve got a vampire,  kids gone wrong, and kids who get it right. (Well, one. Sort of. Eventually. With help.)"

This book was put together by incredibly creative women, Kit St. Germain and Clélie Rich, who wanted to do something that really celebrated speculative fiction. This is it. This is the stuff. Available here.

When the call for submissions went out for Suction Cup Dreams, I was intrigued: an entire anthology about the octopus, written across genres? Yes please. I was even more pleased to learn that my story, "Three-Hearted," about an alien invasion that starts not with the human world but in our oceans, would be included in the anthology. 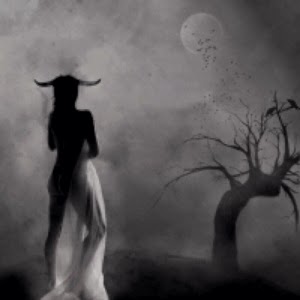 Phobos Magazine is a relatively new magazine of weird fiction. Their first issue featured stories on the theme of "Zugzwang:"


Mutually Assured Destruction. The Mexican Standoff. The babysitter hiding in the bedroom closet as the maniac mounts the steps. For our inaugural issue, "Zugzwang", (tsoog-tsvung) we want work that drops protagonists into apparently impossible dilemmas and then shows us how their choices play out, for good or ill.

This inaugural issue included my flash piece, "Hail Khepera in Thy Boat," which was inspired by an ancient Egyptian invocation to the god associated with the dung beetle.

Kate Wolford of Enchanted Conversation collaborated with World Weaver Press to bring out a Krampus-themed anthology just in time for Christmas 2014. It's called Krampusnacht: Twelve Nights of Krampus and is exactly what you need for all your favourite naughty people, whether it's Christmas or not.


Krampus is a beast-like creature from the folklore of Alpine countries thought to punish children during the Christmas season who had misbehaved, in contrast with Saint Nicholas, who rewards well-behaved ones with gifts. Krampus is said to capture particularly naughty children in his sack and carry them away to his lair. While Saint Nicholas is known colloquially as "Santa Claus", Krampus is often sarcastically referred to as the "Anti-Claus".

I had a blast writing my story, "Prodigious," about a big box toy store clerk who only wants to date his boss's daughter, but must first go through the humiliation of playing Krampus at the annual Christmas party. Things get complicated when he discovers that playing Krampus enables him to see who's naughty and who's nice.


Free to Read on the Web

"The Mechanic's Darling" at Allegory, a Tri-Annual Online Magazine of SF, Fantasy & Horror

The first and only story I wrote based on a prompt from an online plot scenario generator, "The Mechanic's Darling" features the world-weary receptionist of a satanic mechanic.

Editor Ty Drago puts together a great magazine that's free to access. Go heap your best story submissions, praise, and dollars upon him!

"Voop" at Z-Composition
I wrote "Voop" because Dave and I couldn't stop laughing while we speculated about the nature of vampire digestive tracts. It is about vampire hunters who are tracking their prey through an urban landscape by looking for...certain...signs, as trackers do. The title will tell you what you need to know if you think about it hard enough. Elizabeth Akin Stelling of the awesomely named Z-Composition was kind enough to reprint it in August 2012.

"The Other Daughter" at Enchanted Conversation (Cinderella Issue)
When I read the Grimm Brothers version of Cinderella, I was bothered by the magic in it. Everything Cinderella needs simply appears: the dress, the shoes, the wee birds who help her with the tasks set for her by her stepmother. It seems there's a lot of sacrifice going on to get her where she needs to go. I wrote this story from the perspective of the sacrificed.

"They Drink Us In Our Sleep" was one of the first stories that was accepted for publication back when I started making a serious writing effort. The anthology that accepted it, The Devil's Food, went belly up before it saw circulation. Boo! I liked the story enough to publish it here on my blog so you can read it for yourselves. Yay!

Hello, I am myself completing a first fantasy novel, The Acts of Simon Magus, about a legendary rival to the Christians in the time of Jesus. It combines early legends with a serious examination of the social and religious environment that produced Christianity. See my draft Indiegogo page at http://simonmagus.com/indiegogo I'd be grateful for any comments from an experienced writer!

Hi Glen. Your novel sounds fascinating. I wish you all the best with it.