First off, thank you for all your support and well wishes for Dizzy. He had his surgery yesterday. Everything went well and he is in mopey recovery.

The positive news is that the tumor, which was small a couple of weeks ago, had slowly but steadily shrunk to less than half of its original size. While mast cell tumors do change a lot (it's one of their traits), they tend to shrink and grow rapidly, rather than just shrink.

Our vet Dr. Kate noticed that the tumor had shrunk, so she was able to modify her original plan and do the surgery under sedation and a local anesthetic rather than sedation plus gas - much easier on Dizzy. The incision is on the back of his neck and about two inches long - not as big as we thought it would be based on some information we read, though still sizable on a little guy.

The staffers at the office reported that once Dizzy woke up, he clucked like a chicken to get attention. I am not totally sure which of his many noises that would be. He makes the strangest noises. It is a little unearthly. It's possible (probable) that he came up with a whole new noise just for this occasion. Apparently everyone fussed over him. They even took a post-op picture because, and I quote, "He looks like a flower!" I suspect that they slipped that green towel into the cage to make "leaves." I tried to take more pictures once we got home, but he got tired of having his photo taken right away. 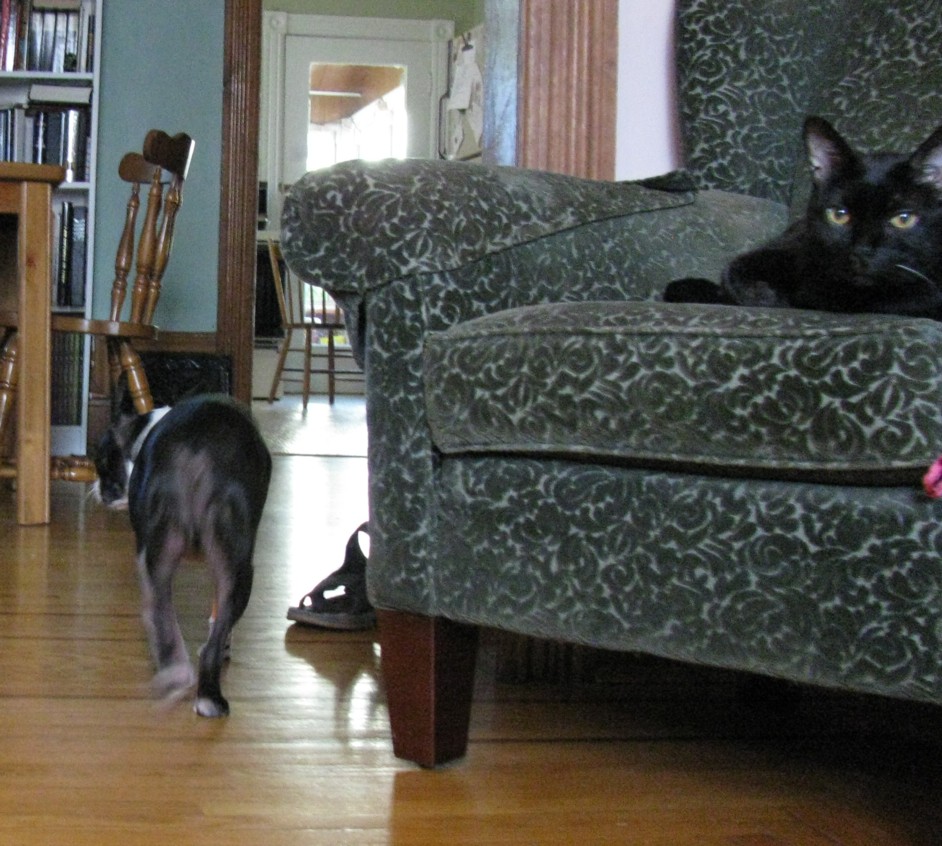 Ben-the-cat is keeping a close eye on things. He doesn't usually get too close to the dog but he checked him out thoroughly when he got home. Never one to be outdone, Ben is back on antibiotics for an apparent lung infection. It is a festival of sad around here. When I stopped by to pick up the cat's drugs today, I told the receptionists at the vet's office that I was really tired of seeing their sweet faces.

Basically, the next step is to wait and see what the pathologist has to say. Typically results take a week. Fingers crossed for a good result. As usual I'm happy to receive any good vibes, healing thoughts, prayers, mojo, or whatever you've got.
Posted by Elizabeth Twist at 8:31 PM

What's that line from Ghostbusters about cats and dogs living together? It's here, too, so, well, I guess it is the end.
I hope the best for your pets.

Glad to hear that the news sounds this good! Healing vibes are definitely heading Dizzy's way, and if you want some company down at the pier again this weekend, I'm certainly available. ;)

And it sounds like you've chosen some great vets. I'm thinking about Dizzy, and Ben too and sending them and you some good wishes.

Awe poor Dizzy. I hope the news from the pathologists is good.