NaNoWriMo 2012: The Writening Day One

So tired. Thursdays and Sundays are my days off, so I was fortuitously able to spend much of today writing and plot figure-outing.

One thing I'm doing is trying to pre-think my characters a bit better, rather than have them be all haphazard (and therefore flat). I've got some scant plot points sketched out, but more importantly, I'm drawing some handy schematics for my characters that are helping me remember what their typical responses should be in a given situation.

So far, I've drawn up some dodgy looking notes on tiny slips of blue paper. This is the one I did for Walter Esterson, a secondary antagonist: 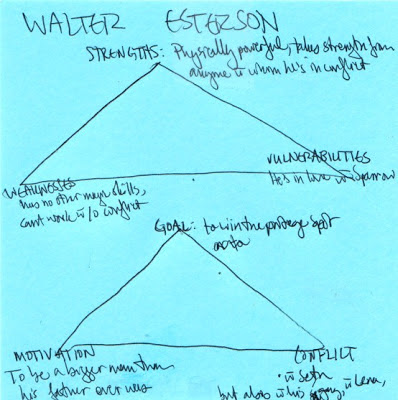 Yup, it's messy. Sorry about that: these are raw notes. In case you can't read my writing, these two triangles represent a summary of Walter's character. The top triangle maps his strengths (things he's good at), weaknesses (things he isn't good at), and vulnerabilities (what he cares about / what can hurt him). The lower triangle maps his goal, what motivates him to reach that goal, and who he conflicts with. Both of these schematics I've adopted thanks to listening to the Storywonk podcast. Alastair and Lani go into both of these ideas in detail over the course of numerous episodes, so if you find the schematic confusing or want to know more, that's where you should go.

I've been thinking about keeping my characters "cleaner" - i.e., doing more to get to know them and make them more self-consistent - ever since reading Game of Thrones earlier this summer. One of the many things that George R. R. Martin is amazing at is making a character's traits grow directly out of his or her place in society and other circumstances.

In making myself think through this simple schematic, I found that I had to push a minor character like Walter Esterson to a more nuanced place. I needed someone who could and would function like a bully. The world I'm writing allows for a particularly dark version of magic. Walter basically feeds on conflict: the more he can draw someone into a fight with him, the more power he has. Without conflict, though, his magic doesn't work. That idea gave me strengths and weaknesses for Walter, but I had to think a while to give him something that he really cared about. We can be hurt in those areas where we open ourselves up.

I decided to give Walter a love interest: Sparrow Lao, a member of his gang of ne'er-do-wells. The way I'd been picturing Walter, he was basically a flat villain type, eager to make mincemeat of my main character. Giving him something to really care about not only softens Walter a bit, it also changes his responses in the scenes where he and Sparrow are together. He's just as interested in offering Sparrow support as he is fighting. I'm really liking the way these schematics serve as a reference for me to review all of a character's concerns, before I insert him or her into a scene. It makes tracking them through an interaction much more fun. Because I'm working on a story where the conflicts are multi-directional, I'm hoping this will help me grow my plot fairly organically.

I plan to draw schematics like this one for each character I introduce, major and minor. It only takes a moment or two, but it forces me to answer questions I might not have thought through.

Ooh! I like those triangles! I'm usually not a big fan of filling out template-style questions, but these relate the character directly to the story in an intuitive way.

*Sneaks off with new toy to add to toolkit*

Oooh thanks for sharing. That looks very smart. I've got to get over to storywonk.

Good luck with nanwrimo, looks like you're heading for success.

I do all my notes on computer these days because I got tired of making copious notes and then a week later couldn't decipher what I'd written down.

Doing a chunk of the backstory - for characters and plot - has helped me feel more stable in the actual writing of the novel. Working out some logic issues ahead of time also seems to be helping in terms of smoother sailing in the writing. We'll see... :)

@Botanist: I think I know what you mean. I've tried on numerous occasions to do those character questionnaires, where you answer a hundred or fifty questions to get to know your character. I always felt like I was generating a lot of stuff that I couldn't know ahead of writing, and that wasn't central to the plot. This schematic lets you think of characters as plot functions, which somehow makes them more real, at least to me.

@Debs: I hope you like Storywonk when you get there. I love listening to podcasts, so it's ideal for me.

@moody: I don't compose on a computer, so little pieces of paper keep me from turning it on unnecessarily

@Madeline: I guess I've struggled with figuring out what kind of backstory / prep work is helpful to my process. I guess that's what we're all trying to figure out? It's all part of the fun.

Elizabeth,
I've never settled on any particular method of developing a character's bio/profile, as I've always thought there was a 'right' way I didn't know about and everything I tried or considered doing was 'wrong'? So in the long run I've dumped so many efforts to flesh out a character's background, etc, for thinking it was incorrect?