I have a tai chi friend who struggles with the concept of practice. At one point, he said, "I think in some way's it's better to sit in a chair and think about tai chi, rather than practice and do it wrong."

Can you spot the faulty logic here? 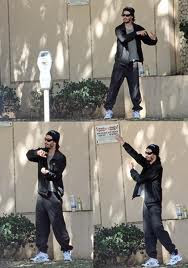 That's right, Keanu. Tai chi is something you practice by doing it.

Likewise, if you want to write, the way to get better is to do it.

A couple of weeks ago, I was talking with an aspiring writer friend of mine about how many words you can manage to get down on the page in a day. She was talking in admiring tones about a friend of hers who wrote a large manuscript in a relatively short period of time. The friend had done somewhere around 1200-1500 words a day. Which is pretty good. (Although some people claim you need 10,000 hours or one million words before you stop writing crap.)

I averaged a little better than that during NaNoWriMo this year, although on most of the days that I wrote, I produced between 2500 and 3k.

In many ways, this has been the year when I discovered I could do raw word count. Of all the lofty creative goals I set back in late December 2009, my 2010 raw word count goal (225k, if you must know) is the only one it looks like I'll meet. But it's also been, in many ways, the most important goal.

My writing friend was a little mystified by all this raw word output. She has trouble squeezing out 300 or 400 words in a day of writing.

I'm not trying to boast here. But I was trying to figure out why I was able to get a couple thousand words of raw, rough draft in a couple of hours. The answer? I have done a whole heck of a lot of writing practice.

Back in the early 90s, when I was first realizing my dream to write, I discovered Natalie Goldberg. I read her Wild Mind: Living the Writer's Life back then, and it was a revelation. Mostly, the idea that simply writing for writing's sake was productive and helpful and made you a better writer, felt correct to me. It also took a lot of pressure off. Natalie Goldberg recommends writing in ten-minute stints. Set a timer and go, keeping your hand moving throughout the ten minutes. I did a lot of timed writing when I first read Wild Mind, and for a long time afterward. Unlike journaling, timed writing is just stream of consciousness stuff. Goldberg says it's about learning to trust your mind. I agree with that. It's also about building stamina as a writer.

Fast forward to early 2007. For some reason - I don't remember why now - I picked up a copy of Julia Cameron's The Artist's Way. This book is laid out as a multi-week course, with different exercises and areas to explore in order to release any blocks you have to creativity. The fundamental structure of Cameron's program is two-fold. She recommends a weekly "artist's date," where you take yourself to places or allow yourself time to do something that inspires you - what Cameron calls "filling the well." She also recommends what she calls "morning pages:" three raw, unedited, written-as-fast-as-you can stream of consciousness pages of writing, done first thing each morning.

Now, I never did get the hang of the artist's date, except for when I was living in Washington, DC, and I could go to a different and free museum every single weekend. But I did do morning pages, for a long time. They are time consuming. I have since fallen off the morning pages wagon. But I learned a whole heck of a lot by doing them. (If you're like me and barely functional in the morning, take heart: according to Noelle Stern, writing at Archetype: The Fiction Writer's Guide to Psychology, doing morning pages at night will not kill you or anyone else.)

Now, when I do raw, unedited, stream-of-consciousness writing, it's in the service of plot and what I call raw word count - the number of words worth of creative fiction I've written in a year. The 200k I've done so far includes 61 079 words of new novel, a bunch of short stories, and pieces of another, now-defunct novel. Not all of that word count was easy to execute: a lot of it came out with the approximate elegance of phlegm at the end of a bad cold. But the habit of just letting it all flow out on the page is something I trained myself to do through lots of practice, lots of timed writing, and lots of morning pages.

I've had people - creative writing teachers, specifically - sneer at the concept of writing 50k in one month, or getting a ton of writing down in short order. And I'm intrigued by claims that your creative juices really flow if you write as little as 500 words a day. But for me, I have to say, I'm comfortable with larger output, if I know my plot point A and point B for the day. I'm amazed at how little 3k really is, how little plot happens in that space, and some days, the best days, I'm scrambling to get it all down and keep up with the idea factory.