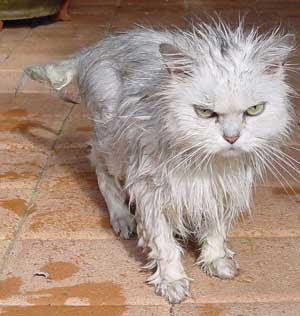 Bottom line, "You're not going to like it" is bad dialogue. As a writer, you've got to have each character's perspective and personality in mind as you compose. This can be tricky, and it's good if you're making a character say something nasty, and it's great if you're thinking, "Oh man, A is not going to like what B's got to say." But don't make B say that. It's a poor attempt at manipulating the reader.
Posted by Elizabeth Twist at 4:42 PM

Wow. That quicksand was more of a deep puddle. Which makes you wonder why the divas were willing to step in a gross puddle to begin with.

That was amazingly bad. Wherever did you find it?

I think the only acceptable usage of "you're not going to like it" is when the character then does not tell the thing that the other character won't like. Then it just makes it kind of interesting that the non-knowing character is willing to remain non-knowing.

I think I searched "quicksand TV shows" on Youtube.

Then there was some clip watching, to make sure I had just the right quicksand.

I think you have come up with a redemptive usage of "you're not going to like it." Hoorah!

That's a good one, Eileen.

I think another situation that makes sense to me is this: B is a 'stir the pot' type of character who actually WANTS A to react in a negative fashion to this news!

Like you said in the post, it's a case of flagging the revelation with a particular emotional undertone, of setting up expectations. Certainly, if I'm sure that you won't like whatever-it-is, I can just 'drop it on you like an anvil.' Maybe if I'm not sure how you'll take it and I want you to get mad, this little nudge will help.

Or maybe you'll see through it and get mad at me for being manipulative, of course. But it does seem to me like there's lots of ways of taking the trope and making it work in better ways than the lazy shorthand.